We go hands-on, and chat to creative director Patrick Liu

If there was one thing that the Angry Birds franchise needed, it was a fresh set of eyes.

After five games and more than 1,500 levels, the Angry Birds formula has become stale, culminating in the "shallow and uninspiring" Angry Birds Friends.

The team over at Rovio's new Stockholm studio, which was opened in August 2012, has been given the chance to be those fresh set of eyes.

"We came in with fresh minds about what we would like to do," Patrick Liu, creative director at Rovio Stockholm, says. Liu was a producer on Battlefield 3 and Medal of Honor at DICE before he joined Rovio's birds' nest. 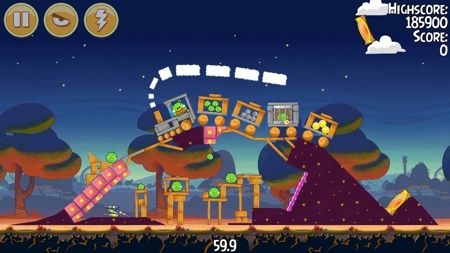 "Honestly, we don't think that much about what can't be done", he tells Pocket Gamer.

Novel ideas - including "jack-in-a-box, mirrors, and pigs dressing up as birds" - were dreamt up, tested, and ultimately thrown away before the final idea was chosen.

In Abra-Ca-Bacon, the new update to Angry Birds Seasons going live on iOS and Android tomorrow, Rovio borrows technology from Aperture Science and places portals around the battlefield.

Two same-coloured wormholes are stitched together through space and time, so anything that enters one portal - be it a bird, pig, block, or box of TNT - is belched out the other.

It makes the game more chaotic and dynamic than ever. Levels collapse in on themselves as bits of blocks and planks of wood spill into one portal, tumble out another, and rain down on another part of the map. 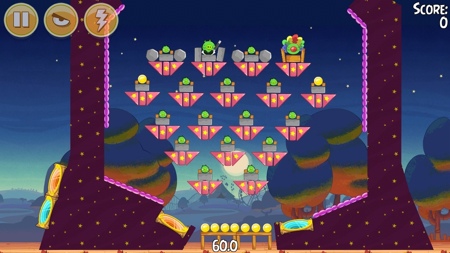 But it's as much about clever puzzles as wanton destruction. Levels are set up so that you need to use the portals to sneak in underneath a rickety structure, or take a shortcut to a cache of dynamite hidden above the level.

These portals also require more advanced tactics. "What if you go through several portals in a row? What could you possibly push into the portals? Can you collide with yourself?" Liu asks.

The Abra-Ca-Bacon update includes 30 base levels. You can also unlock three bonus stages (all playful twists on the new formula) by earning armfuls of stars, and unlock a fourth bonus stage for deft use of the Mighty Eagle. The traditional golden egg appears, too.

Through this new update, Liu's team also throw a fresh power-up into the mix. To get the upper hand in proceedings, you can now scatter a handful of explosive crates around the battlefield.

The Abra-Ca-Bacon update was teased in a live-action trailer, produced in the 6-second video app Vine.

"At first, we thought that six seconds is really short, but then we realised that a short level gameplay is approximately that length," Liu says.

Vine has no editing suite or post-processing facility, so it was all down to "careful planning, great lighting and a very co-ordinated team of puppeteers, sound engineer, camera man, props, and special effects".

So, does this magic-centric level pack mark the end of holidays- and celebrations-themed DLC in Angry Birds Seasons?

"We've had basically all big holidays from all over the world on the table," Liu says. "We'll see what happens."

You can download the Abra-ca-bacon Angry Birds update now.

Show how much you wub Sound Shapes with new Dubstep DLC