The force is strong with this one

Update - Zen Studios confirmed that Star Wars Pinball will launch in all SCEE territories on May 15. The original story follows.

In a case of Jedi déjà vu, Star Wars Pinball is coming to the PlayStation network. Again.

While the trio of Silver Award-winning Star Wars DLC tables made their way to the Vita version of Zen Pinball 2 earlier this year, Zen Studios took to the PlayStation Blog to announce that a new standalone version of Star Wars Pinball will launch in North America on May 14.

Before you accuse Zen Studios of being a scruffy nerf herder, there's some good news: if you already purchased the Star Wars tables for Zen Pinball 2, you'll be able to download the standalone version of Star Wars Pinball at no additional cost.

Do or do not

For example, players will be asked to join the Galactic Empire or the Rebel Alliance when starting the game. Once their allegiance is chosen, a player's high scores will be added to their faction's tally as they fight for the Balance of the Force.

Additionally, Star Wars Pinball will feature an experience point system that will allow players to move up the ranks of the Galactic Empire or Rebel Alliance.

Finally, Zen Studios' Community Manager Bobby Loertscher noted that there are seven new Star Wars Pinball tables planned and that "at least three" are planned for release later this year.

We've reached out to Zen Studios to see if we can receive any news on a European release and will update this story when we hear back. 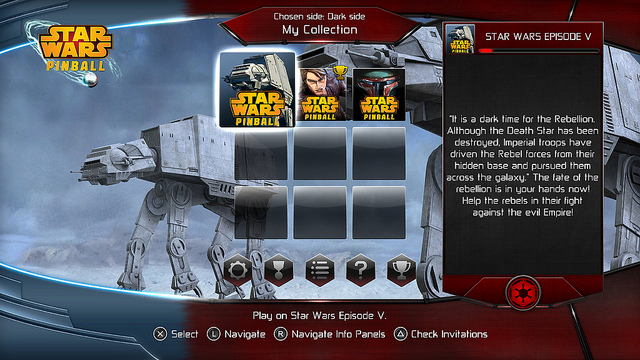