Multiplayer for Minecraft PE beats Mojang's Realms to the punch

Earlier in the month, we told you about Mojang's plans to deliver multiplayer in Minecraft - Pocket Edition via its next update.

Well, it looks like Mojang's proposed Minecraft Realms server management service is going to be up against some competition from a third party. And one which doesn't charge subscription fees to boot.

Released yesterday, Innovative Devs's Multiplayer for Minecraft PE is an app that allows Minecraft - Pocket Edition players to set up private and public servers, and take their phone- or tablet-based crafting experience online.

We should clarify a few things at this point, though.

Firstly, Multiplayer for Minecraft PE has not been endorsed by Mojang, so has no official support from the Minecraft creator.

Secondly, this is a companion app designed to work in conjunction with Minecraft - Pocket Edition. As such, you'll need both the game and the Multiplayer for Minecraft PE app in order to get online.

However, provided you have the necessary software, the service, which was spotted by the folks over at Touch Arcade (and subsequently tested by some of its forum members), does appear to work as advertised. 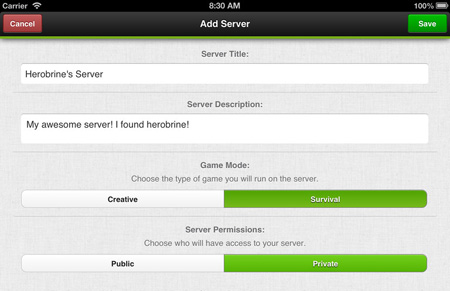 Not only does Multiplayer for Minecraft PE enable you to fire up a server and get crafting with your friends, but it also invites you to engage in voice chat and publicise your server within the app to encourage other players into your world.

Most interesting of all, mind, Innovative Devs isn't charging a subscription fee for this service. Once you pay the app's £1.99 / $2.99 ticket price, you'll never have to put your hand in your pocket again.

This subscription-free approach could cause a minor panic attack over at Mojang HQ, where the team is planning to charge players $10 - $15 per month for a similar - albeit offical - service.

Frankly, we doubt the Minecraft - Pocket Edition crew is going to take too kindly to Innovative Devs swooping in and stealing its multiplayer thunder. In fact, we wouldn't be surprised if Mojang attempted to get the app pulled from the App Store altogether.

However, Innovative Devs has addressed these concerns, stating: "We've diligently avoided any issues which may give rise to valid clams from any of the parties concerned."

If you can't wait for Minecraft Realms (or don't fancy the monthly fees), you can pick up Multiplayer Minecraft for PE from the App Store for £1.99 / $2.99 now. For how long, however, is another question.

Magicka: Wizards of the Square Tablet