Gameloft has posted an image on its Twitter feed teasing the impending release of what is almost certainly an Iron Man 3 game.

The teaser picture, in which two familiar glowing eyes peer out of an all-black background, appeared on the French developer's UK Twitter feed yesterday.

Instead of including a title card or target platform confirmation, Gameloft merely posted a date on top of the image. That date is March 27th, 2013.

Now, we may not have Tony Stark's unlimited resources or genius-level IQ, but we can safely deduce from the image and text that Gameloft is going to release Iron Man 3 on iOS - and possibly Android - sometime tomorrow. 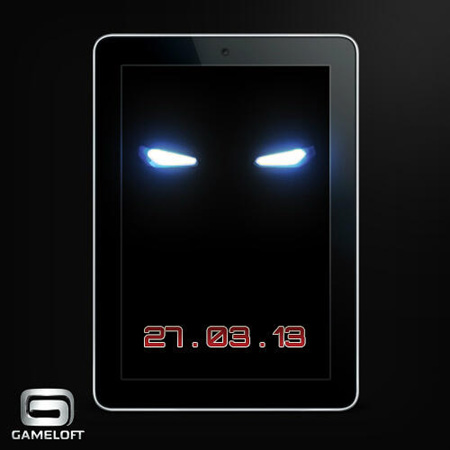 With only the teaser image to go on, though, we can only really speculate about Iron Man 3's gameplay. However, looking at Gameloft's history with the franchise, a third-person brawler would be the safest bet.

If so, you could be going toe-to-toe with classic Iron Man villain The Mandarin (the main antagonist in Shane Black's upcoming Iron Man 3 movie) within the next 24 hours.

Check back tomorrow to see what Gameloft has in store for old Shellhead.