Unmechanical excels at creating an atmosphere. The sense of loneliness and oddity that creeps through its cavernous spaces really is something to behold, and its tale of a sad robot on a journey of discovery is worth the entry fee alone.

However, for all of its gorgeous graphics and clever puzzles, a slightly broken control system means that there's frustration as well as enjoyment layered in its intoxicating bulk. This is a decent port of the PC game, but it's by no means the definitive version of the puzzling adventure.

The game casts you as a robot dragged into a subterranean labyrinth of switches, physics puzzles, tubes, and strange combinations of machinery and flesh. It's an enthralling place to be, and it looks breathtaking on Retina displays.

You control your robot by tapping anywhere on the screen. As long as you hold your finger down the robot will attempt to move in that direction. Tapping on the robot activates its tractor beam, which you can use to pick up and interact with certain objects.

You'll need to flip switches, open hatches, and drag objects around to solve the puzzles the game presents you with. They start off relatively simple, but it isn't too long before they're spanning entire levels.

It's here that the controls really start to cause problems. Everything feels unwieldy and uncomfortable, and simple tasks like picking up a box and dropping it on a switch end up taking much longer than you ever thought possible.

The fiddly nature of the scenery makes navigating passages with a plank particularly harrowing, and this slowly starts to eat away at your enjoyment.

And that's a real shame, because if you get beyond the awkward controls you'll find a rich and rewarding experience that forces you to think in different ways. These are frustrations worth sticking through.

It might not be the best way to play Unmechanical, but this iOS version is still a treat for anyone who hasn't experienced the PC original.

It shows just how beautiful the Unreal Engine can be, and while it will leave you chuntering sometimes there's enough fun to be had that, by the end, those chunters will be forgotten. 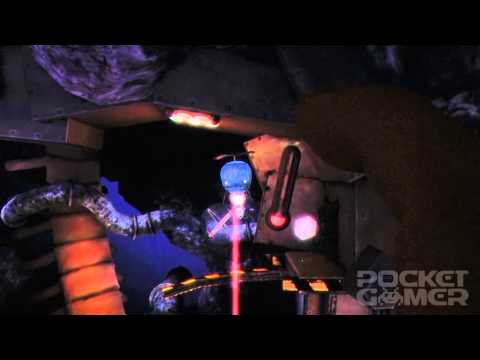 Want more? Check out our growing collection of Unmechanical articles!

While the Unmechanical controls can be infuriating sometimes, the game is still a hugely entertaining and engaging adventure
By Harry Slater
| Mar 20, 2013 |
iOS + Android
Find out more about Unmechanical

This week on the PS Vita Store: Atelier Totori Plus, Nun Attack, and Dead or Alive 5 Plus