The weekend. A time for kicking back, relaxing and crushing a robot invasion in New York City.

At first impression, it's a typical topdown defence shooter that has you in the sweaty pants of a NY construction worker who's fighting off endless waves of robots with whatever equipment's around him - nail gun, spanners, propane tanks, wrecking balls etc.

It's nothing to write home about graphically, but gameplay-wise there's more to it than meets the eye.

For one thing, each of the weapons has a slightly different aiming method, so while you deploy the explosive propane tanks as an area weapon, to successful aim the nail gun you lead into the shot. This means you're not tapping on the robots, but slightly ahead of them.

It sounds a bit weird, but it works really well, as you quickly shift between weapons, depending on what robots are attacking and how close they are.

Other elements of your defence include police cars, helicopters and cement trucks which you can deploy as a smart bombs straight along the road the robots have to cross, at least once you're filled up your attack meter.

Of course, this being an endless wave game, the robots will eventually make it over the road and climb up the skyscraper - crying 'Bob, Bob' - and zap you.

At this point, you get to spend your in-game currency in the shop to upgrade your weapons. Being free-to-play, you can also spend real money to speed your progress.

And that's that. Crushin' Robots - NYC doesn't do anything you haven't seen before, but what it does it does well. An universal app, it's free for iPhone and iPad.

You can see how the action unfolds in the video below. 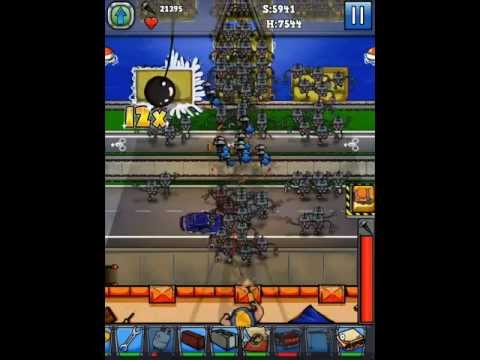 Itching to pre-order a Samsung Galaxy S4? EA will have you covered with 16 supported games at launch

Chicks on the ground, bird in the air

Fend off a robot invasion with your nail gun