A colourful endless-running title called Le Vamp has just transformed into a bat and flapped its way onto the New Zealand App Store.

We're telling you this because the game's developer is High Voltage Software.

Anyway, in Le Vamp, you're tasked with helping a young bloodsucker who just wants to play outdoors like a normal human boy.

Your aim, then, is basically to ensure his safety as he hurtles through a hazard-packed forest. 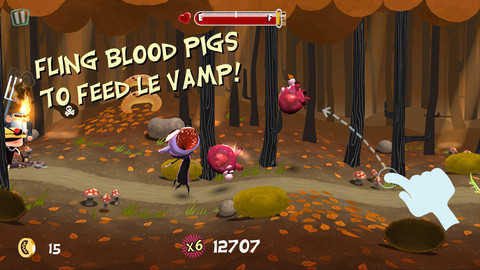 You do this by flicking enemies out of his path, tapping on your device's screen to block deadly sunbeams, and cutting down trees to lay bridges across dangerous streams.

Along the way, you must also collect coins that you can later use to upgrade your little vampire's dark powers, which include sunblock and bat form.

Don't forget to feed the little blighter, either.