Even if you're a fan of endless-runners featuring characters from other media, the past week or so has probably been too much even for you. Temple Run Oz, Mini Ninjas, and Sonic Dash have all asked you to go for a jog with familiar characters.

And now Outland Games is doing the same with characters from multiplayer online battler Monday Night Combat. The outcome is a game that's likely to be overshadowed by its more illustriously licensed counterparts, but that's more worthy of your attention than any of them.

That's not to say that Outland Games does anything remarkable or refreshing, but it's a solid endless-runner with some neat gimmicks that's going to keep you playing longer than any of the other examples of the genre we've seen recently.

Each sprint you'll be leaping over pits, smashing violent robots, dodging mines, and collecting the ubiquitous gold coins that hang around every corner. The further you get, and the more assailants you turn into nuts and bolts, the more points you get when you die.

Coins can be spent on a variety of upgrades and score multipliers, but the game cleverly splits its leaderboards in two. One shows off your score, which you can manipulate with boosts, and the other shows your longest run, which you can't.

The game is certainly a looker, with impressive animations and a cartoon style that brings to mind Saturday mornings in the late '80s. It's fun, too, and builds its challenge well. Each level is randomly generated, but the combos of obstacles you face deeper into a run can be fiendish.

There's nothing about Outland Games that you've not seen before, but it presents everything well enough, and adds a few interesting twists to genre staples, that you're not going to mind.

This is a fun, fast, entertaining, and challenging game that deserves to find an audience. It's just a shame it's come out in the week everyone got sick of endless-runners. 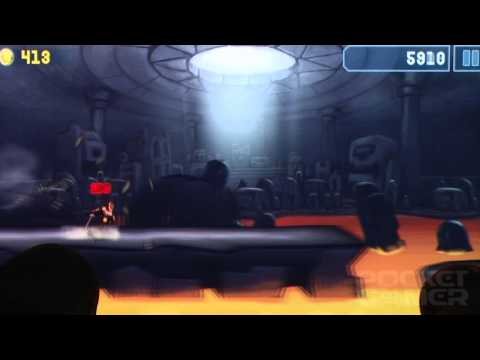 A bright and entertaining endless-runner that gets the formula down perfectly, Outland Games is well worth some of your time
By Harry Slater
| Mar 11, 2013 |
iOS
Find out more about Outland Games

Deep Dungeons of Doom due to drop on digital devices directly