Help a lumberjack get wood in Spellsword dev's upcoming platformer

As members of the worldwide gaming fraternity, we've borne witness to some pretty momentous video game grudge matches down the years.

From Mario vs King Koopa and Alien vs Predator, right through to Sonic vs that slightly darker version of Sonic, digital arenas have forever been home to bouts of hardcore nemesis-on-nemesis action.

In the hopes of contributing its own mutually hostile duo to this exalted line-up, Spellsword and 1001 Attempts developer Everplay has used its upcoming action-platformer Lumber Jacked as the backdrop for another epic gaming face-off. 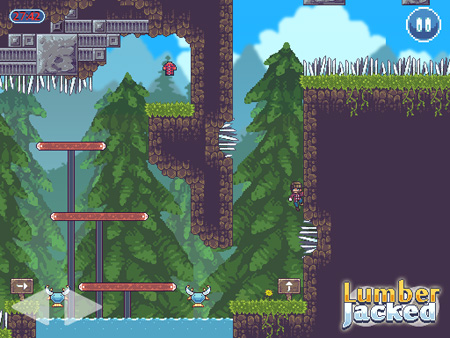 Lumber Jacked follows the trials and tribulations of Lumber Jack, a hard-working woodsman whose timber has been stolen by a gang of beavers.

To reclaim your flammable bounty, you have to guide Jack through a series of side-scrolling levels against the clock, battling beavers and solving puzzles as you go.

The 16-bit visuals are charming, for sure, but we'll have to get our hands on the game before we pass judgement on the overall experience.

Speaking of release dates, an Everplay spokesperson posting on the Touch Arcade forums said that Lumber Jacked should be available for iOS sometime this month.