Updated on February 28th, at 17:30: The prices have since been changed on the Android version, and the two games are now in perfect parity.

An EA spokesperson told Pocket Gamer, "We are aware of an unintentional discrepancy in pricing of in-app purchases between the Android and iOS versions of Real Racing 3."

"The studio team has now fixed this and players of the Android version will see the correct amounts reflected inside their game shortly."

We checked, and it's true. By the way, we're going to take all the credit for fixing this injustice. Is that cool with everyone?

In the topsy-turvy world of Real Racing 3, Android fans are expected to pay more than Apple users.

In the UK, at least, every in-app purchase is roughly 30 percent more expensive on Google Play than its App Store equivalent. 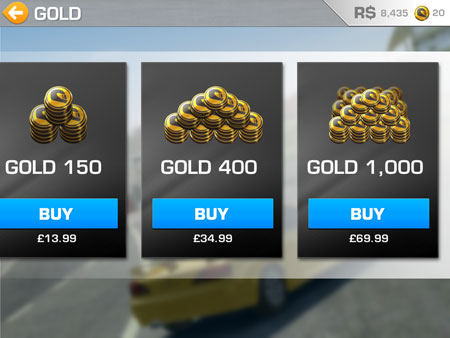 The in-app purchase store in the iOS version 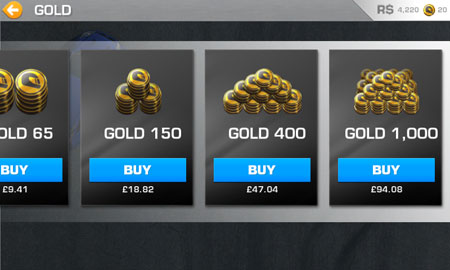 And the same page in the Android version

And, no, the in-game prices are not tweaked to counterbalance the added costs. All the cars, upgrades, and wait timer skip fees are the same in both versions of the game.

In truth, this micro-transaction pricing discrepancy is evident in other smartphone games, too. But not in all.

Android IAPs are more expensive in Dead Trigger and Triple Town than in their iOS counterparts, for instance. The cost of IAPs in the Android and iOS versions of Ski Safari and Bad Piggies, however, is exactly the same.

We've reached out to Real Racing 3 publisher EA for comment on this pricing discrepancy, but the company hasn't responded to our request yet. We'll let you know if we hear anything back.

iOS and Android Game of the Week - your vote needed