There are certain enemies and obstacles that are destined to be reviled forever - digital creatures and structures that become the bane of a player's existence to such an extent that whenever their names are mentioned a collective shudder runs down the spine of every gamer within earshot.

To that list you can now add the green floaty meteor thing from 1001 Attempts. This relentless hunter spells the end of many an attempt on the highscore table, either directly or indirectly, and more than earns its place in the hate files.

The reason the green meteor works so well is that it changes the rhythm of 1001 Attempts, introducing a new variable just when you're settling into a random but recognisable pattern. The green meteor is chaos. And chaos is evil.

1001 Attempts is all about chasing down highscores, be it your own or somebody else's. You play as a cape-wearing little creature, and the aim of the game is snaffling as many gems as you can. These gems appear at random on the screen, and whenever you grab one another appears.

The control scheme is simple. 'Left' and 'right' arrows move you left and right, and a 'flip' button flips gravity, sending you from the top of the screen to the bottom. Touch any gems along the way and you get some points.

Unfortunately, while you're trying to nab more gems the game is throwing an increasingly tough arsenal of horrid obstacles at you, each of them telegraphed by a flashing warning sign. To begin with it's just spikes and spinning saws, before lasers and rockets are thrown into the mix too.

So you'll die. And the game will make a witty quip about it, often referencing some other game in the process. Then you'll tap 'start' and try again, because you know this time you're not going to make the silly mistake that led to your explosive demise.

What follows is a perfect exercise in balancing frustration and success. Each catastrophic failure pushes you on to try again, egged on by the simplistic nature of the game, and the fact that you know, deep down inside, that you can do better.

Play for more than a few minutes and you too will learn to hate the green meteor, but play for a bit longer and you never know - you might start to work your way up that leaderboard. Once you're thinking like that, there's no escape.

1001 Attempts is compulsive hardcore gaming at its finest - an intoxicating mix of arcade style and twitchy modern platforming condensed into minute-long bursts of frantic escapes and desperate reactions. 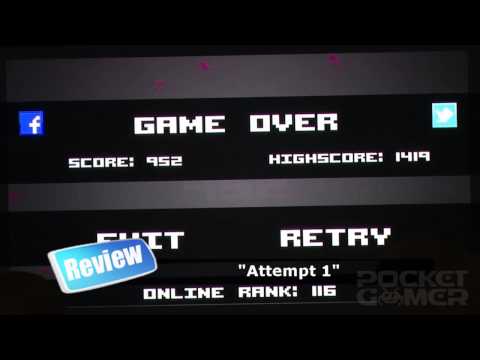 Want more? Check out our growing collection of 1001 Attempts articles!

A brilliant and beguilingly simple hardcore platformer, 1001 Attempts delivers more excitement in its bite sized blasts than most games could ever dream of
By Harry Slater
| Feb 28, 2013 |
iOS
Find out more about 1001 Attempts