Sony and Team17 have just confirmed that classic Amiga platformer Superfrog will leap onto the PS Vita later this year in glorious high definition.

Following on from the iOS, Android, and Vita re-release of the studio's beloved bug hunter Alien Breed, Team17 has decided to celebrate the 20-year anniversary of Superfrog by giving the game an HD reskin and putting it up on the PlayStation Store.

If you're too young to remember the Amiga, Superfrog was a well-regarded platform game starring a Lucazade-powered frog.

In true Sonic fashion, you had to leg it through a series of environments (starting with a green hilly zone, natch) collecting circles of gold and avoiding massive wasps. 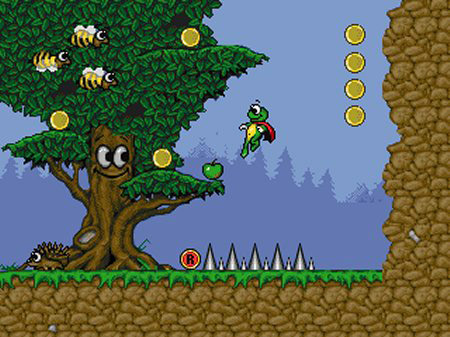 Superfrog running on the Amiga

Despite the presence of that fairly shameless corporate tie-in (see Chupa Chups and Zool for further Amiga-based game / food crossovers), Superfrog was a first-rate title produced by a studio approaching the peak of its powers.

Team17 did a pretty good job of porting Alien Breed to mobile devices last year, so we've high hopes for this retro refit.

Expect to see Superfrog HD on the PlayStation Store later this year.

Out at midnight: Classic Amiga platformer Superfrog HD makes the leap from Vita to iOS