Pay for the pit lane

Earlier this week, EA made an announcement that some were expecting, some were hoping for, and some feared with every molecule in their body: Real Racing 3 will be free to play.

But, we've been left wondering how EA and Real Racing 3 developer Firemonkeys are going to integrate the F2P model into their game.

Well, EA has just held a star-studded press event in Los Angeles, where various US outlets got to go hands-on with Real Racing 3 and find out exactly how the freemium model is being used in the upcoming racer.

Real Racing 3 is all about damage. Every shattered tail light, every busted bumper, and every cracked windscreen is displayed in detail on your vehicle. But, according to Justin Davis at IGN, "this damage isn't just cosmetic."

"It also reduces the car's top speed, acceleration, and other performance statistics."

After each race, then, you'll be given the option to use in-game currency to patch up your crippled car.

"Repairs take time to complete," Jeff Scott explains over at 148Apps. "How long depends on how much damage it is."

Jared Nelson at Touch Arcade says, "repairing your broken taillights after a race might take roughly a minute". IGN's Davis adds, "a rebuilt engine [requires] up to 3 hours". 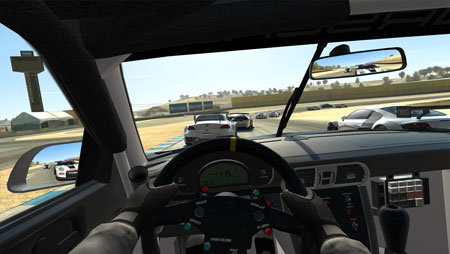 Of course, you can expedite proceedings using the game's premium currency (gold coins). They are given out in game - but in very small quantities. If you want more, you'll need to reach into your wallet and pay with real-world cash.

"While the damage to your car does affect the power, you can choose to not repair it and keep racing," Scott adds.

Nelson reckons that the repair timers will become less intrusive as you expand your garage. "Once you have multiple cars, if one is tied up with wait times you can just choose another from your garage and go complete events with that one."

Roger Cheng at CNET says, "EA has promised that no part of the game is locked out for players who don't choose to spend money. But players who want to ante up can receive cars and access to different racetracks faster."

So, there we have it. How does that sound? Annoying and intrusive, or balanced and fair? Will it be a "cut and shut" job, or will it represent a thoughtful approach to a modern market trend? Let us know your thoughts in the comments section below.

Keep an eye on Pocket Gamer for more Real Racing 3 news and info. We're off to see the game ourselves at events in New York and London later this week, you see. Stay tuned.