Will the LittleBigPlanet team help reinvigorate the Vita?

It's never been in doubt that the PS Vita is a fantastic piece of kit with some decent games.

But, how many of those games can be classed as true system sellers? Hardly any.

While the Vita is home to a long list of fantastic ports, the one thing it has lacked right from the start is a group of outstanding titles designed specifically for the console by one of its star studios. 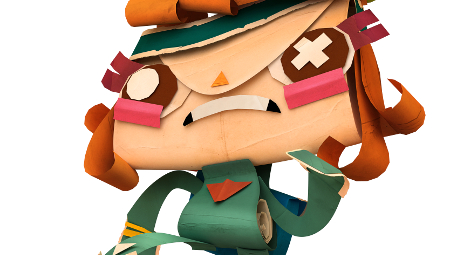 Born on the "titanically messy desks" of the Media Molecule staff down in Guildford, Tearaway is the kind of game that the Vita has been crying out for all along - original, charming, creative, effervescent, and eccentric.

All of these things could readily apply to the team's wondrous LittleBigPlanet (LBP) games, of course, and although Tearaway benefits from the same DNA as LBP, this is a different prospect entirely.

In the loosest sense, Tearaway is a 3D platform-adventure game set in a world made entirely out of paper, where you, the player, have god-like powers. Yep, you can manipulate the world with your own hands. You control a messenger, Iota, on what is described as "a buddy movie adventure".

Everything within the Tearaway world takes the form of an elaborate papercraft construction, reflecting one of the ongoing obsessions within the Media Molecule HQ.

"Without really realising it, we kind of built these landscapes around us from piles of paper," lead designer Rex Crowle reveals.

"As I was getting annoyed doing concept art and screwing it up and throwing it on the floor, those balls of paper started to take on a little life of their own," he admits. "Then, it was like, 'Maybe these are boulders', and it started to broaden out from that."

"We started to explore what paper can do, the fascinating limitations it has, and the way in which it could make you think in a completely different manner about building a world."

Such limitations and lofty ambition forced Media Molecule into designing bespoke technology that could animate and bring to life its papercraft creations. 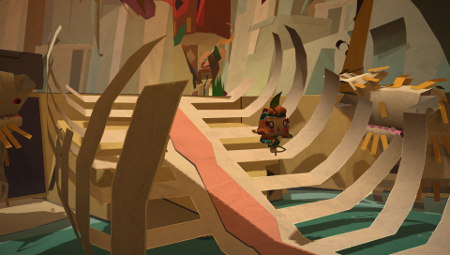 While it was impressive enough to see the net results of its efforts in the game's playable demo, the official Media Molecule studio tour betrays the exhaustive level of attention to detail needed make it work.

"We couldn't really get into the mindset of working in any kind of grid or blocks, so it was quite a hard challenge," Crowle admits. "Particularly as we moved from the prototyping stage into working on the engine."

What might not be initially apparent is just how perfectly each character matches its papercraft equivalent. Essentially, the game engine 'builds' each model as if it were made out of paper, complete with all the tabs and folds required as the game loads.

Such perfectionist dedication might seem unnecessary, but this is evidently not a regulation development project by any normal standards. Besides, it help keeps the game's file size down.

How that translates into raw gameplay terms is perilously tricky to judge at this early stage. During our time at Media Molecule's studio, we spent roughly 15 minutes 'hands-on' with Tearaway. This offers little more than the briefest taste of what to expect from such an ambitious project.

Tearway is set in the routinely surreal confines of a place called Sogport. And, as mentioned before, you control a messenger called Iota, a rather feeble, foppish kind of fellow, who resembles a walking envelope. The tiny strips of paper for limbs seem barely fit for purpose, but we'll gloss over that.

"The game experience will begin the second you turn on the Vita, you see the live feed on the screen, and you're moving it around waiting for the game to start," Crowle explains.

"You notice a tiny pinprick - the tissue of lies that we've built around us, and this is what reality is."

"This tiny bit of light starts streaming in and you realise this is some kind of portal. As you're tapping it and touching it with your fingers, it's slowly opening and tearing more. You see a little envelope, a message, and you're trying to pull it out with your fingertips..."

What do we want? Trousers! 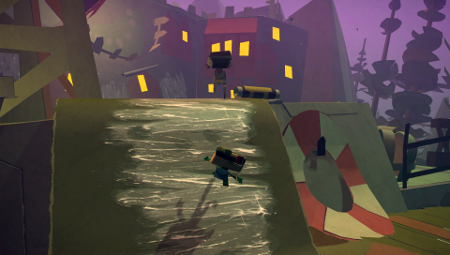 We won't spoil it any more for you, I promise. But, suffice it to say, strangeness abounds.

On your travels, you'll guide Iota around in typical third-person adventure style, jumping on platforms and manipulating objects. Oh, and dodging burly monsters that don't seem to appreciate the cut of your jib.

These "Wendigos" appear to have a weakness for pearls, so it's up to you to grab them from nearby oysters and lob them onto targets. This lures them into traps, whereupon they appear to get gift wrapped in giant boxes. Obviously. What else would happen to them?

When asked for an explanation for some context, we were told: "Fish are building trousers for themselves in their quest to become elite aristocratic fish. They're chasing the Wendigos, and eventually one of them becomes nice to you."

Much has been made of the way Tearaway invites you to physically interact with the world. In our demo, this mainly manifested itself in my being able to tap bounce pads from the rear touchpad, allowing Iota to be launched into the air to gain access to higher platforms.

Elsewhere, we saw some novel use of the accelerometer, with your being able to hold the Vita vertically to view the game world from a different perspective. But, as you might expect, the game will also encourage players to be creative, and import their own photos and designs, and re-texture parts of the game world as they see fit.

But, unlike LittleBigPlanet, Tearaway has been conceived entirely as a solo experience, with no co-operative or multiplayer modes to supplement the game's campaign.

That said, there is a female playable messenger in the game, known as Atoi. The attentive among you will have spotted that 'Atoi' is 'Iota' backwards.

"It's also French for 'to you'. So much meaning!" Crowle beams. 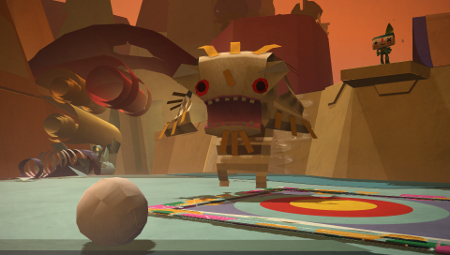 So, this is what we know at this stage...

Tearaway is possibly the most bonkers new game we've come across since Katamari Damacy first fried our synapses all those years ago.

It's a "delivery adventure" where you play as the god of the world, manipulating it with your own hands.

It has a soundtrack largely composed of jolly sea shanties.

It has a gorgeous papercraft visual style unlike anything we've ever seen.

And it's coming to the world's most cruelly underappreciated gaming system.

Will it live up to its obvious promise? Well, knowing the track record of the creatives involved, it'd be a major surprise if it didn't.

Tearaway is heading to PS Vita later in 2013. Read our full interview with Rex Crowle on Tearaway here.

Want more? Check out our 23 other Tearaway articles!