There's an awful lot of moisture in here...

It looks like Rovio is preparing to unleash another Angry Birds Star Wars update on the world.

The shared picture (below) shows an artist's rendering of the Millennium Falcon whizzing down a dark tunnel.

Alongside the image are two hashtags: #ComingSoon and #EscapeFromHoth. 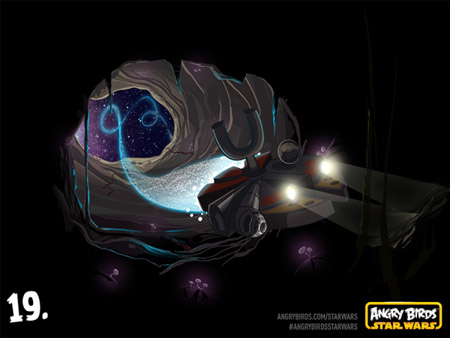 Anyone familiar with The Empire Strikes Back will recognise the cave as the one Han, Leia, Chewy, and the droids take refuge in while trying to evade the Imperial Fleet.

Given Rovio's choice of hashtags, we'd say it's pretty clear Angry Birds Star Wars is about to receive a follow-up to last November's Hoth update.

You have your moments

Though the above tweet is all we have to work with at the moment, the contents of previous Angry Birds Star Wars updates would lead us to suspect a booster pack containing around 20 new levels, plus a new power or two, will be included in this fresh update.

We don't have a firm release date yet for this upcoming update, but we'd suggest you check back with us in about a week's time.

Oh, and watch out for mynocks - that cave may not be exactly what it seems.

[Update] Land of the Free: Show off your Clash of Clans village

Gunslugs running on the Ouya in 2-player co-op mode