A quick note to the console and PC fans reading: if you're looking for someone to blame for the inclusion of "micro-transactions" in spooky sci-fi shooter Dead Space 3, blame us.

According to the game's producer, John Calhoun, this upcoming survival-horror game will allow you to buy resources with real-world cash. This is in order to court smartphone players where in-app purchases are a "standard part of gaming".

Earlier this week, Eurogamer discovered that Xbox 360, PS3, and PC shooter Dead Space 3 will include micro-transactions.

Here's how they work.

The game features resources like tungsten, semi-conductors, and somatic gel, which you can combine in different ways to fashion new weapon parts, ammo packs, or suit upgrades.

You will find these bits and bobs dotted around the icy planet of Tau Volantis. But, if you're feeling impatient, you can top up on tungsten or source new semi-conductors with real money.

From iPhone to Xbox

Calhoun told CVG: "There's a lot of players out there, especially players coming from mobile games, who are accustomed to micro-transactions. They're like 'I need this now, I want this now'. They need instant gratification. So we included that option..." 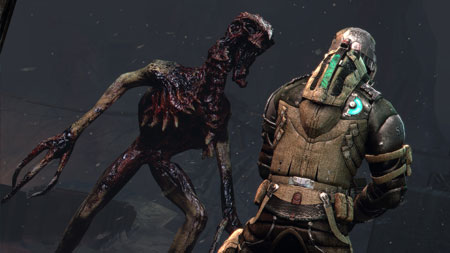 But, while these purchases might scare off veteran Dead Space players, they are intended to win over a whole new generation of players.

"There are action game fans, and survival-horror game fans, who are 19 and 20, and they've only played games on their smartphones, and micro-transactions are to them a standard part of gaming," Calhoun said.

"It's a different generation. So if we're going to bring those people into our world, let's speak their language..."

And that language is the language of money.

Want more? Check out our 10 other Dead Space news stories!