Rather like bringing in Daft Punk to give your generic sci-fi film a dose of aural cool, iOS developer Lucky Frame specialises in jazzing up tired old App Store genres through the clever use of music.

Bad Hotel gave the well-worn tower defence genre a funky makeover, and now Wave Trip does the same for the rise-and-fall endless-runner.

Imagine playing a version of Jetpack Joyride where every coin collected adds a note to a minimalistic electronica soundtrack. If that sounds as cool to you as it does to us, you're in for a treat.

The sound of silence

Even when you start the game proper, there's no sound. The first time you'll hear anything is when your little triangular craft first makes contact with one of the floating orange or blue objects that litter each abstract stage.

This will initiate a little processed drum beat or a synth sound, kicking off a stripped back electronic track. From this point on, collecting objects, activating your shield, and even colliding with an enemy will contribute to the steadily unfolding soundtrack.

There's a purpose to all this beyond making beautiful music. Collecting orange objects contributes to your score, while blue objects boost your score multiplier. Sustain damage from one of the enemies and your multiplier resets to zero.

You can take out some of these pink enemies with your shield (press the left hand side of the screen) but it needs recharging after two consecutive uses, and its range is severely limited.

It's more likely that you'll want to dodge those enemies in true Whale Trail style, pressing the right hand side of the screen to rise and releasing to dive.

It's a very accomplished take on this kind of endless-runner game, but it's nothing we haven't seen before. The stylishly abstract visuals, too, are attractive but sparse to the point of being a little repetitive.

No, it's the aforementioned musical element that really makes Wave Trip stand out. Put on a decent set of earphones and the gentle clicks and whirs really serve to draw you into the game's rhythm.

This musical element is really driven home in Wave Trip's level editor. Here you can throw together your own stages with the minimum of effort. Even if you don't usually enjoy this kind of make-your-own approach (as I don't) it really drives home how integral music is to each level's construction.

Wave Trip is another fascinating exercise in how to jazz up familiar genres with a little musical creativity. Lucky Frame undoubtedly has our ear for its next project. 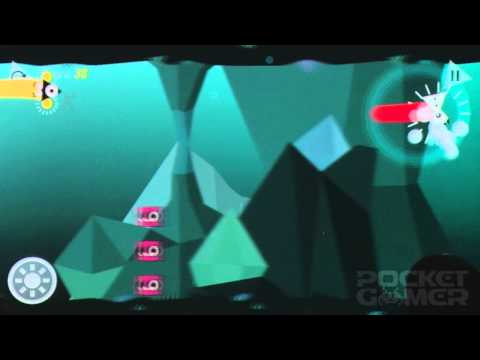 See if you can guess the inspiration for FDG's Banana Kong...