It seems the birds have discovered a peculiar galaxy containing planets composed entirely of water.

This means you're going to have to pit the forces of buoyancy and gravity against each other... if you want to make it through all 30 levels, that is. 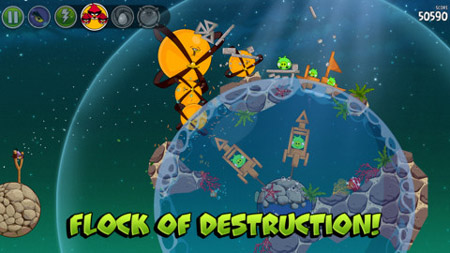 The Pig Dipper update brings with it a couple of new power-ups, too.

For starters, you can turn one bird into several with the Flock of Birds ability. Alternatively, you can make those smug piggies swell and float by using the Pig Puffer perk.

What's more, you can now use the Space Egg to conjure up black holes. Handy for when people say they don't like your space omelettes.

Plus, if you complete all 30 levels, you will unlock three bonus ones for your trouble.

Oh, and look out for the aquatic boss fight. From what we hear, he's no Little Mermaid.