The royals are a different breed from you and I.

If a horrific tentacle monster stole all the stars and happiness out of my world, I'm not too proud to admit that I'd be crying and cowering in a corner.

Swing King's swinging king, however, is made of different stuff. When he finds himself in those circumstances, he takes it upon himself to fly off after the tentacle monster in a bid to restore balance to the world.

Swing King's quest takes you high up into the sky, where you have to rely on a magical flying unicorn and the king's incredibly elongated arm to swing about and collect stars.

Swing King plays very much like another physics-puzzler we can think of, and those who have played a single game of Angry Birds will instantly recognise the mechanics.

Pull back on the king to pull him taut, and you'll see a parabola of dotted lines which maps out your king’s trajectory. Release him and he'll go flying off in that direction.

Unlike in Angry Birds, the goal of each level in Swing King isn't restricted to simple pork-pummeling. Instead, you have to navigate around a series of enemies and obstacles as you collect stars and make your way over to your flying unicorn.

The swing of king

Flying through a level rarely takes long or involves much of a challenge early on. In the intermediate and later stages, however, you'll need to launch from handhold to handhold as you snake through a course of obstacles.

There are cannons to launch your king from (think the barrels from Donkey Kong Country), walls to ricochet off, and tons of other gimmicks and goodies, all of which makes Swing King a fun and challenging experience.

After the novelty of these new means of locomotion wear off, Swing King confronts you with multi-stage boss fights to help move the story along.

Each fight is little more than a series of mini-levels that culminate with you punching the monster in the eye, but they serve as great transitions between the game's different worlds.

While it's not particularly deep in terms of story or gameplay, Swing King plays as good as it looks and delivers a fun - if familiar - experience.

If you're looking for a way to enjoy Angry Birds-style gameplay in a new package, Swing King will not disappoint. It's not the real thing, but it belongs to the line of succession. 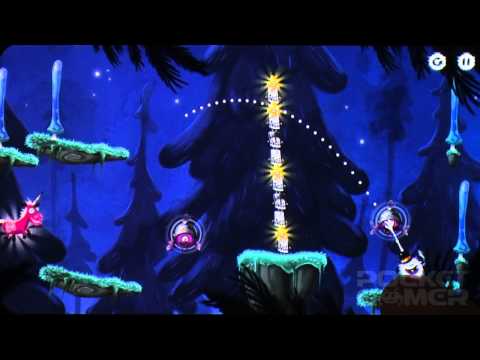 Tales of the World: Tactics Union ported from Android to iOS