Nvidia showed us the future of mobile zombie slaying last night, when it gave CES attendees a brief glimpse of Dead Trigger 2 in action.

The graphics card manufacturer unveiled the sequel to the controversial iOS and Android FPS Dead Trigger to demonstrate the clout of its new Tegra 4 processor.

Though Dead Trigger 2 developer Madfinger was not present to offer a detailed breakdown of the demo, it's clear that the studio's FPS franchise has received a graphical bump, resulting in visuals that are pretty close to those found on home consoles. 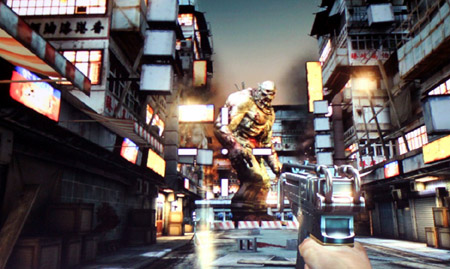 As for the Dead Trigger 2 gameplay, the demo showed a player barrelling around a shabby-looking city, and using an M4 machine gun to take out lurking deadites.

At the end of the video, a gigantic über-zombie appeared, and was then promptly floored by a shooter firing off a few rounds from a heavy-duty mounted gun.

Since the focus of the demo was Nvidia's Tegra 4 chip, there was no mention of Dead Trigger 2's features or release date.

However, now the zombie cat is out of the bag, we should expect further news on Dead Trigger 2 from Madfinger relatively soon.