The gloves come off

Gaming fanatics have been arguing over consoles and computers since the invention of the microchip. Whether it's the Spectrum versus the C64, or the schoolyard rivalries of the SNES and Mega Drive, everyone wants to be backing the best device. With that in mind, we like to conduct head-to-head battles between two popular devices, in a series we call The Tablet Test.

In the previous instalment of The Tablet Test, we compared the iPad mini and Google's Nexus 7, using feisty street racer Need for Speed: Most Wanted to settle the score.

The iPad version came out on top. We declared that "Need for Speed: Most Wanted is an altogether better game on the Apple device. It looks nicer, it runs smoother, it loads faster, and it might just play a little better."

Now, it's round two in the battle between these flagship 7-inch tabs. This time, these mid-sized Android and Apple slates will be running Modern Combat 4: Zero Hour, Gameloft's latest glitzy blitzy war sim.

The Nexus 7 is powered by an Nvidia Tegra 3 chipset, with a quad-core 1.2GHz Cortex-A9 CPU. It also has 1GB of RAM. For just £200, then, you're getting a boisterous little tablet at a very budget price.

The iPad mini, meanwhile, is basically an iPad 2 that has shrunk in the wash. It has the same dual-core A5 chip, the same 512MB of RAM, and the same 1024x768 resolution as the second-gen iPad. It has a pixel density of 132ppi.

Modern Combat 4: Zero Hour is Gameloft's latest CoD-like shooter. It's a globe-trotting, rocket-launching, all-cylinders-firing war epic in which you play as the good guys - and the bad.

In our Bronze Award review of Gameloft's newest FPS, we said, "Occasionally messy, often offensive, but sometimes brilliant, Modern Combat 4: Zero Hour is a blend of entertainment and frustration unlike anything else."

There's no kind way to say this. The Android version of Modern Combat 4 looks like crap.

For one, it's missing a huge number of special effects that are present on the iOS edition. These graphical flourishes give the game a real sense of atmosphere and place.

Plus, some of the textures in the Android version are alarmingly low resolution, making certain parts of the game look really yucky on our Nexus 7. Let's take a closer look... 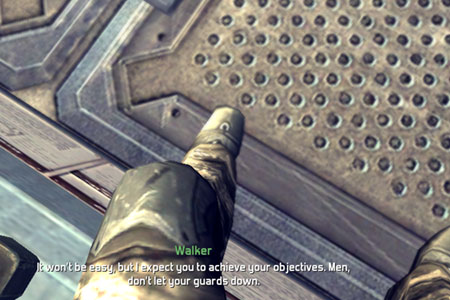 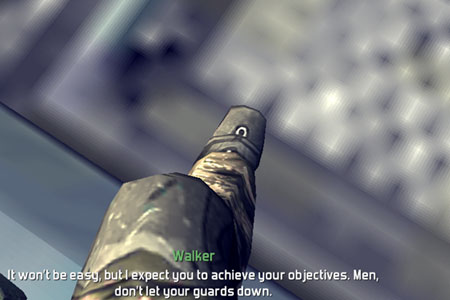 We start the game on a troop transport, just off the coast of an island we're gearing up to storm.

On the iPad mini version, you see, the carrier has relatively detailed textures. On the Nexus 7, however, the floor is so blurry it feels like you need to go to Specsavers. 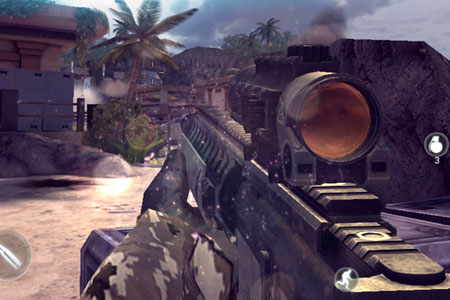 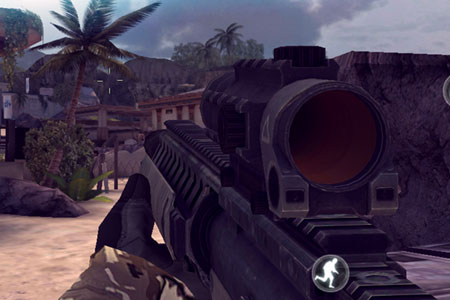 Once we're on the beach itself, we really start to notice the difference.

The iPad game is a noisy, claustrophobic, war-like experience. There's carnage and destruction everywhere, with ash swirling in the air, sand kicking up from the beach, and driftwood on the beach.

The Android scene is a different story. It's quiet and still. Aside from one big plume of smoke billowing out from a distant explosion, there are no special effects. Put the two devices side by side and it's like you're playing different games. 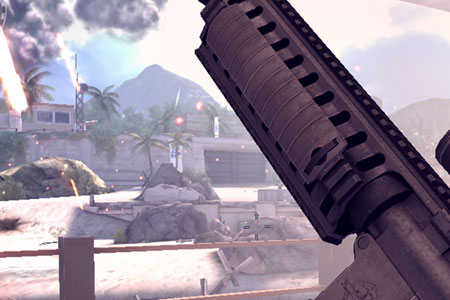 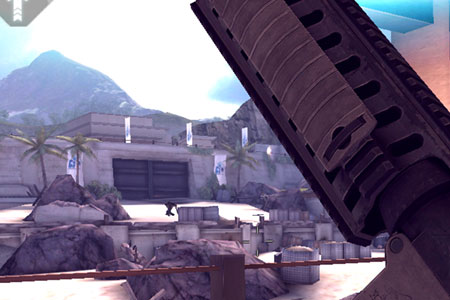 In this shot, we once again see the difference in atmosphere between the games. Looking out this window reveals a peaceful scene on Android, and a chaotic battlefield on iOS.

You can also see the difference in texture quality on the gun model. There's also a different style of lighting - the Android version looks cinematic, while the iOS version looks more natural. I think I prefer Android here. 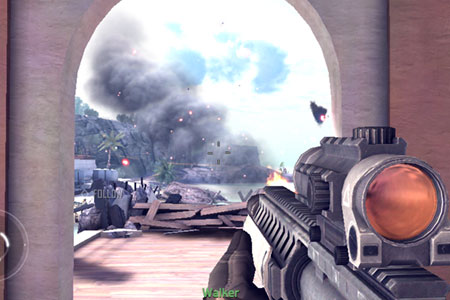 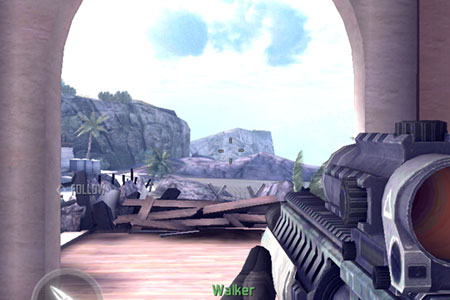 As we look through this archway, we see a fire kicking off a cloud of smoke on iOS, and - erm - nothing on Android. 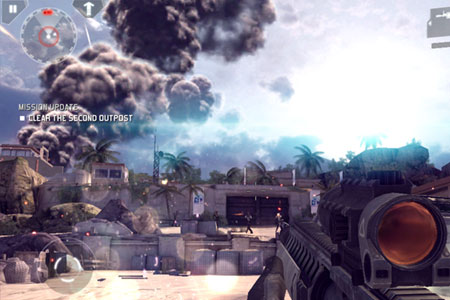 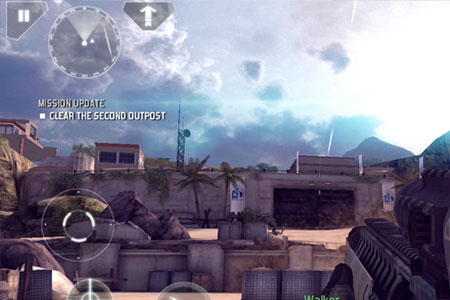 In the iPad mini version of Modern Combat 4, the backgrounds are way more detailed.

In the above scene, for example, there are more palm trees in the distance, and a great pillar of black smoke. 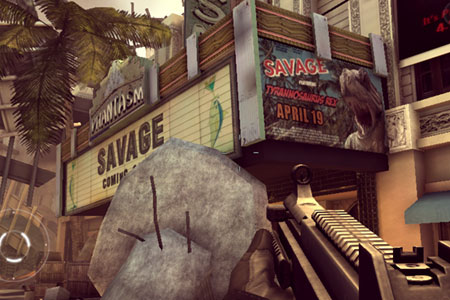 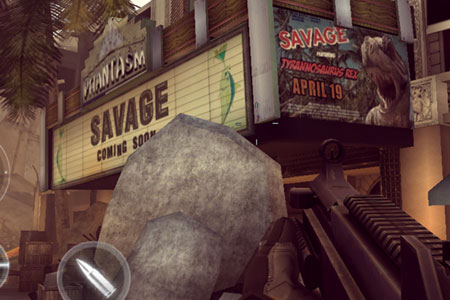 We're in a different scene now. These two images look pretty similar, but there are a few pieces of visual flair that are exclusive to iOS.

Check out the pieces of rebar jutting out of the rock in the iPad mini edition, for instance. 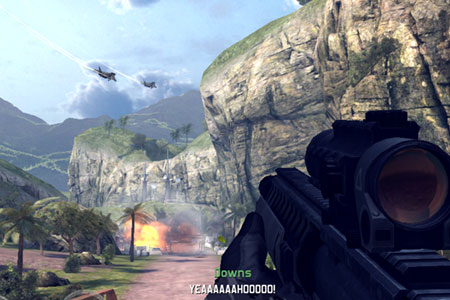 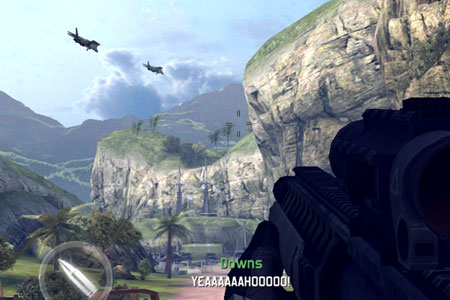 An outside scene. The only details we really lose on the Android edition are the contrails of the overhead jets. 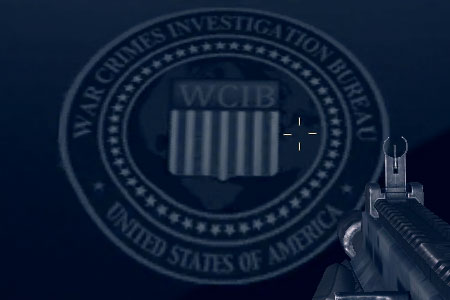 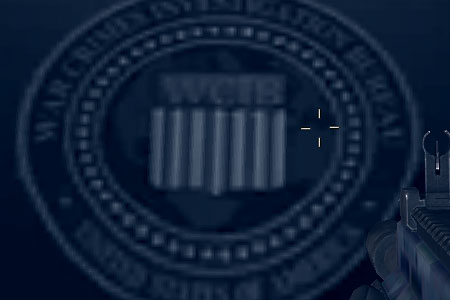 Another blurry texture for the collection.

This iPad mini level is set in the War Crimes Investigation Bureau. 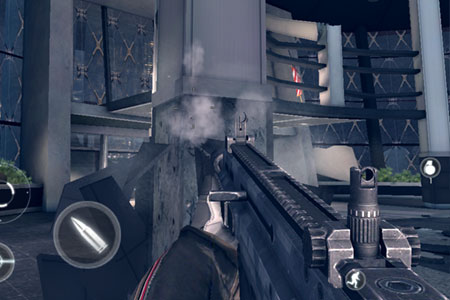 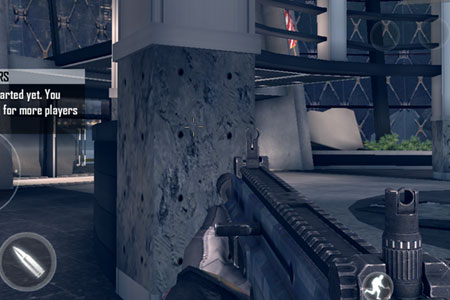 One final comparison. On the iPad mini, we find these marble pillars that can - when shot - shatter and crumble into a pile of rubble. On the Android device, the pillars are completely blank.

The performance is pretty similar across the different devices. The Android tab actually wins in this category, mainly on account of those missing effects we discussed above. That excessive visual flair leads to some framerate hiccups on the iPad mini, while the Android edition is stable throughout.

So you can see the game running on both devices, we've put them side by side in a video. Check it out below. 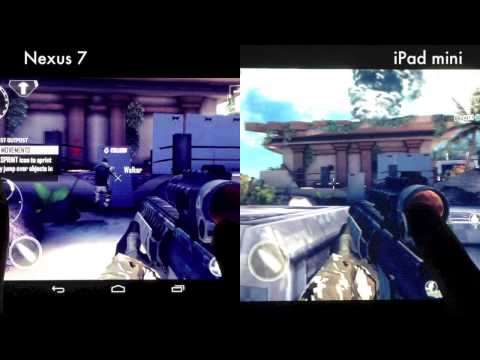 Both devices were rebooted before play, and there were no non-essential apps running in the background.

The game is faster to boot on iOS. It takes about 25 seconds to get to the main menu, whereas on Android it takes 30. It would be the same, but Android has to check for a licence every time.

Online play is similar across the two operating systems. There's no immediately noticeable lag, and there are lobbies full of opponents, no matter which way you swing. Sadly, we encountered more connection issues on Android.

We found that the iPad mini touchscreen is way more sensitive when aiming. Setting the sensitivity to max on the Nexus 7 is the equivalent of having it on about 60 per cent on iPad mini. It's crazy.

We ran into problems with the virtual joypad on both, but they were completely different. On Android, it was simply unresponsive, and sometimes took a good few swipes before it registered our intent to get the hell out of an enemy's firing range.

On iPad mini, sometimes you'd start a new level and find that the joypad literally doesn't work. The only way forward is to restart the checkpoint. It's an annoying little bug.

We should also note that the Android version has support for an external controller, but sadly that only extends to the MOGA one. You can't just hook up an Xbox 360 pad or a PS3 controller and expect it to work, like in Dead Trigger.

On iPad mini, Modern Combat 4: Zero Hour is a chaotic, claustrophobic, shell shock of a war game. It uses special effects like fire, smoke, dirt, dust, flickering light bulbs, and environmental damage to present a world in a state of constant conflict.

The Android version is not quite as dynamic. In the transition to Nexus 7, Modern Combat 4 has lost most of its special effects, resulting in much of the bombast and gravitas of Gameloft's war series going MIA.

Modern Combat 4 is perfectly playable on Android - it's more stable than the iOS version, and you can play it with a controller - but the iPad mini is definitely the winner in this round. Ding ding.

Nintendo will consider the free-to-play model, but Mario, Zelda, and Pokemon are safe

Grab your own Josef the robot from Machinarium, in plush form