Indie developer Polytron has revealed that its infinitely intriguing Xbox Live Arcade game Fez will be ported to new platforms this year.

That means it might finally be released on a gizmo you can fit in your pocket.

Fez is an adventure platformer, set in impossible Escher-like worlds where perception is reality.

You can shift the camera around in clunking 90-degree increments and if two distant walkways line up in your new viewpoint, you can simply hop between them.

That's not the half of it. The game's evocative world is also chock-full of cryptic puzzles and conundrums.

There are mysterious owls, secret rooms, a clock that chimes in real time, a whole alphabet of foreign glyphs, and even a few QR codes. Remember them? 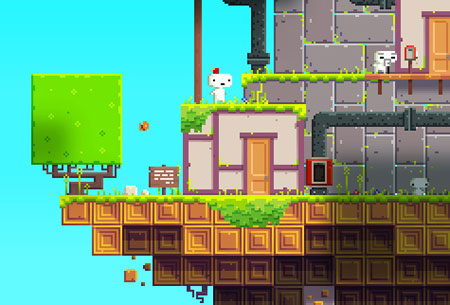 Writing on the Polytron blog, infamous indie auteur Phil Fish says, "Yes, I've heard you, dozens of people emailing me everyday telling me how much of an idiot I am for not porting Fez to everything."

Fish confirms that "Fez will finally be ported to other platforms", but that's all the info he offers. The secretive scamp.

He could just mean that the Xbox game will make an appearance on PC and PS3, of course, but let's cross all available appendages and hope he means something more along the lines of iOS, Android, or Vita.

A trio of hackers run custom code on Nintendo 3DS