One of our jobs here at Pocket Gamer is to sieve through the hundreds of apps that hit the App Store and Google Play every single day, and unearth the true gems.

We've now tallied up this week's votes - from comments on the site, tweets on Twitter, and votes in our Facebook poll - and the winner is: Penny Arcade The Game: Gamers vs Evil (iPhone and iPad). 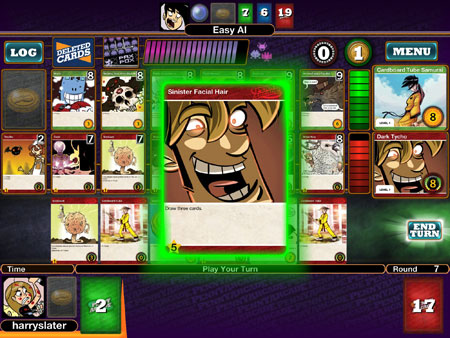 You play as Gabe, Tycho, or one of their many allies in the fight against evil opponents like Dark Tycho and the PAX Pox.

All the cards in the game are based on characters from the webcomic. So, you can unleash the Cardboard Tube Samurai, Baby Ninja, a werewolf with a top hat, and Div (the surly anthropomorphic DIVX player).

To defeat your foes, you'll need to collect loot, swap cards, and unleash attacks on the bad guys. The usual stuff. These quick-fire games take about 30 minutes to complete.

The physical game is well respected, so it's nice to see it appear on the App Store. In this iOS incarnation, there's asynchronous online play. And if you're playing offline, you can take advantage of the pass-the-handset mode.

You've also got a tutorial, a rule book, and a card gallery. Hooray.

Penny Arcade The Game: Gamers vs. Evil drops down to 99c/69p

Penny Arcade The Game, Ascension: Chronicle of the God Slayer, Nightfall, and more Playdek games on sale this weekend