Because monsters only come out at night

Disney is all set to relaunch Pixar's 2001 CGI hit Monsters, Inc. at the cinema in full 3D. To mark the event it's releasing Monsters, Inc. Run for iOS tonight.

Before you dismiss the game as a cynical cash-in, consider these two things. Disney knows what it's doing with iOS games, as evidenced by Where's My Water?

Secondly, and perhaps most importantly, Disney has put Get Set Games on the case. If anyone can make a cute, appealing game about loveable monsters it's the developer of Mega Jump and Mega Run. 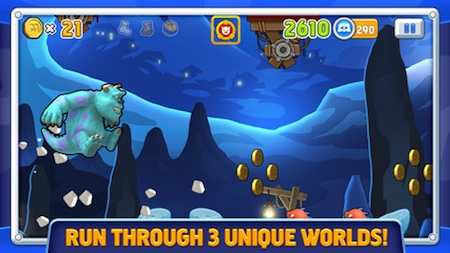 In fact, Monsters, Inc. Run looks suspiciously like the latter game - just with a bit of a Pixar reskin. This would mean it's a simple single-button 2D platformer with coins to collect and enemies to bounce on.

You'll probably recall that Disney did a similar thing with the launch of Brave, partnering up with Imangi to produce a reskinned take on Temple Run called Temple Run: Brave.

We'd wager that far fewer people have experienced the source material in this instance, so we can only see Monsters, Inc. Run as a positive thing.