Ain't gonna know what hit them

Noodlecake Games has revealed that it is working with developers RocketCat and Madgarden to port the pair's highly addictive iOS game Punch Quest to Android.

Noodlecake is best known for games like Super Stickman Golf and Lunar Racer, but it also operates a successful side business in porting iOS games to Android. Earlier this year, for example, it helped League of Evil and Trainyard get on Google Play.

Now, it will do the same for Punch Quest - a compulsive mash-up of auto-runner and coin-up brawler, in which you slug bats, goblins, zombies, and skeletons, while sprinting through a dungeon. 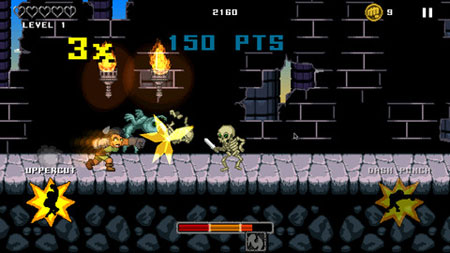 We loved it. In our Gold Award review, we said, "Punch Quest is just a whole lot of fun. It's perilously addictive, and mastering the fighting system is a thrill." We nearly had to shut the site down for a day when half the team got in a heated high score battle.

We've also followed this game's success post-launch. We reported that the free-to-play game made practically no money, then eventually became a paid game.

There's no word yet on what pricing model Noodlecake will plump for with Punch Quest on Android, or when it will hit Google Play, but we'll let you know in due course.

For now, you better start exercising your thumbs - this one's gonna grab you, and it won't let go.