Zynga and Digital Legends have unleashed a new third-person shooter on the Canadian App Store. Respawnables is a cartoony free-to-play blaster, with an art style inspired by PC shooters Team Fortress 2 and Battlefield Heroes.

You've got 15 weapons too choose from, including shotguns, sniper rifles, grenade launchers, and machine guns. To get the more powerful weapons you must reach a specific level before you can unlock them - or you can buy them with in-app purchases.

The in-game shop also has gadget like grenades and dynamite, and premium items that boost the amount of XP and cash you walk away with at the end of a fight. 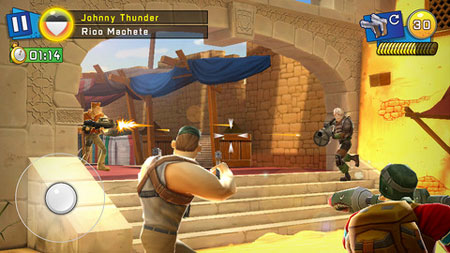 Oh, and you can play dress up, and outfit your burly hero with different hair dos, shirts, and trousers. They also boost certain attributes, like accuracy and agility.

Respawnables has a singleplayer mode, where you fight bots and beat mini missions (like "kill 25 enemies using the assault rifle" or "stay alive for one minute") to earn cash and XP.

But the real star is online. Here you can fight Free For All and Team Vs matches with a handful of players - both over Wi-Fi and 3G or 4G. It does a little matchmaking magic to automatically find you some opponents.

There are four maps to play on right now - the dusty Sandtown, multi-level facility The Rocket, Royal Garden, and Headquarters. More content is promised in the game's App Store description. 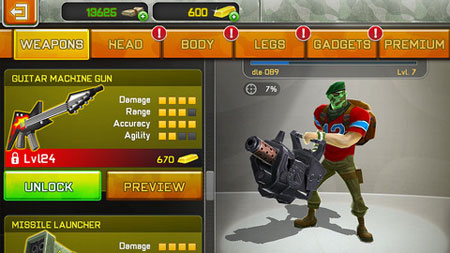 "So how does it play?" we hear you ask. Pretty well, actually. Movement is fluid, and you can aim and shoot simultaneously (most weapons keep firing automatically). Everything's super fast-paced, and you have enough health that you don't die every five seconds.

Some weapons might need balancing tweaks before worldwide launch, though. In one match a guy utterly dominated with a sniper rifle. Combine that with the fact that you can buy the best weapons, and Respawnables has the danger of quickly becoming unfair.

The game's out in Canada now, for free. You'll need an iPhone 4 or better, a fourth gen iPod touch or newer, or any iPad. Respawnables should hit international App Stores later this month, or in early 2013. We'll let you know.

PocketGamer.biz Week That Was: Clone champions, popular failures and tablets get the infographic treatment