Rovio is celebrating the run-up to Christmas by releasing one new Angry Birds Seasons level a day over the 25 days of advent.

In this festive update - entitled Winter Wonderham - the furious fowl shake frost from their feathers to knock some sense into a group of ice-dwelling piggies.

The ice itself brings a fresh dynamic to the standard Seasons gameplay, with pigs and birds now slipping and sliding across the frozen landscape. 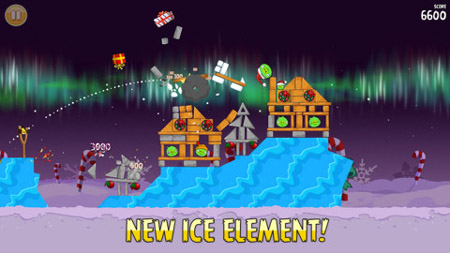 There's a new visual hook, too, with the cold battlefield now bathed in the green glow of the aurora borealis (otherwise known as the northern lights).

In addition to cracking the 25 advent levels, committed Angry Birds Seasons players can unlock three secret levels, and earn some "special wintry treats" for their trouble.

Fans of ice sculpture should also keep their eyes out for the Ice and Snow World level, included in honour of the annual Chinese Art Festival.

One Winter Wonderham level will be added daily until December 25th. The levels are free to anyone with an internet connection, and are available in both the iOS and Android versions of Angry Birds Seasons.

Sponsored Feature: IntenseGames Limited on why you should dash to buy Infinity Run on iOS