Look at the photo below. This isn't a protective case surrounding the Nook HD, but the actual design. It possibly won't to be for everyone, but compared to the usual flat slabs in black or white it's actually a bit of a breath of fresh air.

It serves a purpose, too, as the indented back and rubberised-feel edging helps you hold it in either portrait or landscape mode. Add in the fact that it's very lightweight (just 315g), and the Nook HD tablet seems more than capable of taking on the other sub-£200 tablets fighting for sales this Christmas. 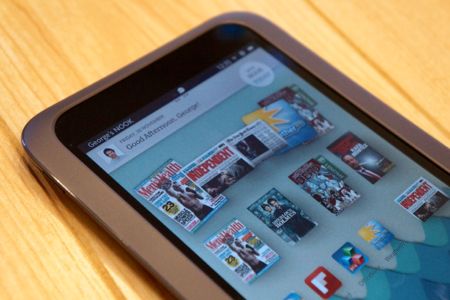 The unique design with screen surround might not be for everyone

Barnes & Noble has clearly tried to make its Android-powered tablet look just like an e-reader, rather than a poor cousin to an iPad. It just so happens that this seemingly basic e-reader can also show full colour photos and play games, video, and music.

With a 7-inch, 1440x900-pixel display, the Nook HD has a better screen than all of its 7- (or 7.9)-inch rivals, with a brightness level that enables you to read things outdoors - although its glossy finish does mean it will pick up lots of reflection and force you to move around to get a good, clear view. The screen is also very good at picking up fingermarks. 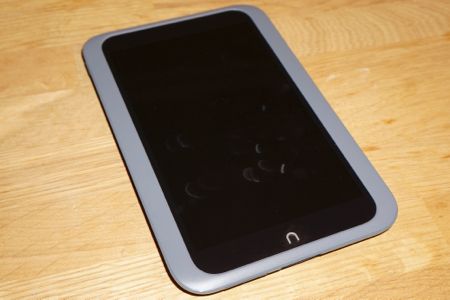 Of course, while Pocket Gamer doesn't review e-readers, it has to be said that for reading books, newspapers, magazines, and comics, the high-resolution really does make a huge difference.

At 243 pixels-per-inch, it's easy to read a full page without zooming in, while you can even 'tear' out pages (by dragging down two fingers vertically) to add pages of interest to a scrapbook that's safe even if you later delete the book or magazine.

This does mean that the Nook HD can be used for more than just playing games or browsing the web, and when you launch the movie player it becomes clear that the tablet is more than capable at doing tablet duties, helped by the powerful OMAP 4470 dual-core processor running at 1.3GHz. 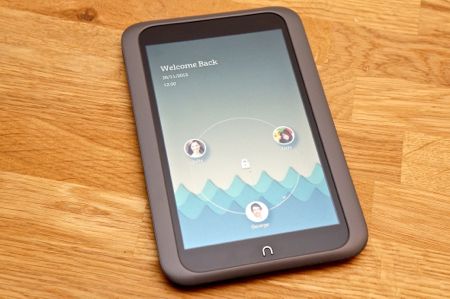 Nook Profiles: An excellent addition that is only now being gradually introduced on some Android tablets

Another great feature, now being introduced by Google from Android 4.2 onwards, is the ability to have multiple user profiles and share the Nook with the whole family. A nominated administrator can choose what apps, books, magazines, and other content is available to each member of the family.

Swapping users is simple - you're presented with each ID on the lock screen and you can drag the user you want into the centre. While other tablet makers might hope for everyone to have their own tablet, Barnes & Noble has perhaps been a little more realistic in the current climate. 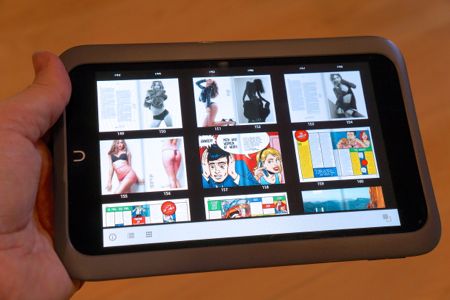 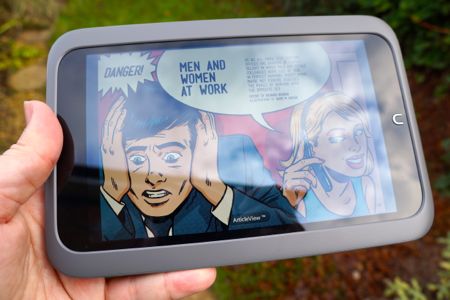 Reading outdoors is aided by the bright screen, but you'll still need to move around to avoid glare

Although based on Android, with elements of the UI noticeable within some menus (like settings), you won't get access to the Google suite of apps - including Google's own Play store. The home screen is also totally different, with various carousels to access your content and a shop that's accessible as a separate tab.

The shop mixes all of the available content together, with curated choices to supplement the more common categories. It means similar titles you might be interested in won't always be chosen by how recent or popular they are.

Apps are profiled, too, and Barnes & Noble has selected a large number of apps and games, but there will never be as many as there are on the Play store, nor will you get access to the latest titles as quickly. This is, sadly, one of the rather major downsides of the tablet and something to consider - just as you might with the rival Kindle Fire HD from Amazon.

However, as with the Kindle, the simplicity of the user interface is a strong point for users who want a totally non-threatening look and feel, and you should still find the major blockbuster titles, such as Angry Birds Star Wars. 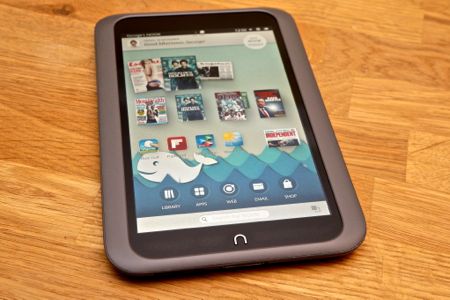 The use of subtle pastel colours almost makes the Nook HD look like it has an E Ink display, but when you load up a movie or HD game and increase the brightness you really begin to appreciate that gorgeous screen. Stereo speakers on the back also enhance the experience further.

You'll find no camera at all on the Nook HD, which shouldn't be a problem unless you have a particular interest in video conferencing, but using a non-standard charging socket will annoy just about everyone.

The battery life is good, so charging can often be days apart, but there's still no excuse - especially as the ordinary e-readers use micro-USB. 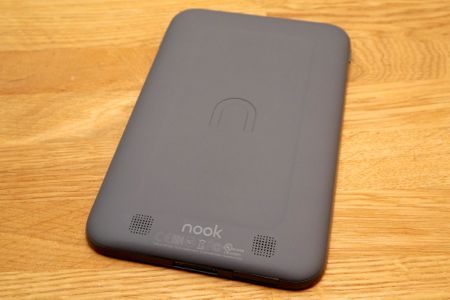 So, the end product will be seen as both brilliant and disappointing by different people. If you're after the true Google Android experience, with access to more games and apps than you'll find here, you might have to look elsewhere.

However, if you're keen to have access to a huge selection of books, newspapers, and magazines, with a more simple user interface and the nicest display of them all, the Nook HD is a bargain, with prices starting at £159 for the 8GB model and £189 for 16GB.

You can now get a Nexus 7 with 32GB for £199, but Barnes & Noble has an ace up its sleeve in the form of a memory card slot that lets you buy the 8GB model and grab a 32GB memory card for around £20 or less - making it better value still. 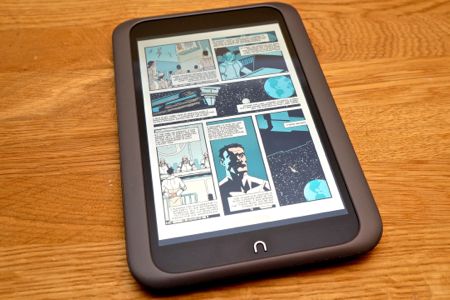 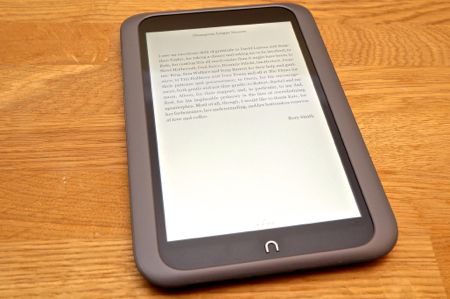 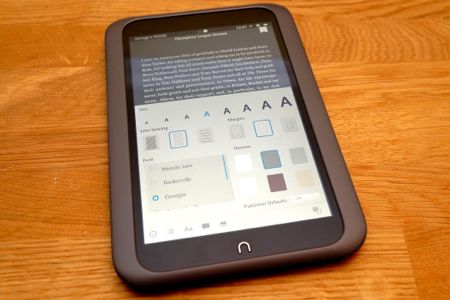 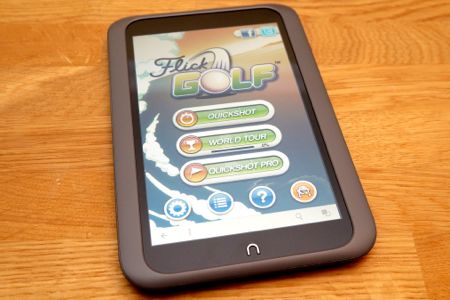 There's loads of competition in the sub-£200 price bracket, and the Nook HD can't match a Nexus 7 (or an iPad) for game and app choice, but with its practical design and access to millions of books, magazines, comics, music, and film, plus expandable memory and the best-in-class screen resolution, Barnes & Noble has come up with an enticing alternative to the usual suspects
By Jonathan Morris
| Dec 4, 2012 |
Android

Can your fingers do the hoola?

It's time to Monster Pinball in HD