The only thing worse than a bad game is a mostly bad game.

When there truly are no redeeming features worth talking about, you can discard the offending specimen and carry on with your day. But when a title shows you a glimmer or two of hope, there's a part of you that will want to press on in case you miss out on a glorious ending to a terrible start.

Venegance: Woz With a Coz fits into that second category. Every wall you run into, every button press the game ignores, just compounds the fact that with a few tweaks, this could have been an enjoyable little experience.

The game is a frankly ridiculous tie-in with a movie set for release in 2013. You split your playing time between Steve Wozniak, real-life co-founder of Apple, and Detective Vengeance, the eponymous star of said film, played by the perma-grizzled Danny Trejo.

After Steve's wife gets kidnapped, it's up to you to get her back by murdering your way through an army of street thugs. Little Woz trots through the level automatically, leaving you to control his leaps, slides, and blasts from whichever weapon you have equipped.

This is essentially an endless-runner chopped up into not quite bite-sized chunks. Sometimes you play Woz, sometimes Vengeance, but the outcome is the same - shoot the bad guys, dodge the obstacles, and get to the end of the level alive.

What is a coz?

The problem is that the levels are poorly designed, and you're going to die a lot. Whereas in an endless-runner with randomly generated stages that's half of the fun, here it means everything becomes horribly repetitive.

It's bad enough dying when it's your own fault, but when the game doesn't recognise a button push, or places an obstacle in such a way that there's only one way to get over it, you can't help but feel a little cheated.

Without the level system, and with a little more polish, Vengeance: Woz With a Coz could be a diverting endless-runner. As it is, it's a muddled and broken mess. 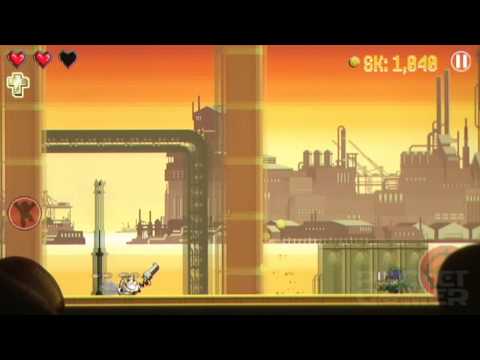 Apple co-founder Steve Wozniak now kicking celebrity butt in Vengeance: Woz With A Coz on iOS