Since our promising hands-on with Hamilton's Great Adventure THD at MWC back in March, we've been keeping an eye out for it - and now here it is on Android.

If you're expecting a game detailing Lewis Hamilton's decision to leave the McLaren F1 team, you might be a little disappointed.

Anyway, Hamilton's Great Adventure is a top-down 3D platform-puzzler filled with collectibles, logic puzzles, and collapsing platforms. The goal is to get our intrepid adventurer to the level exit, which invariably requires a key - and a fair bit of sleuthing - to unlock.

Along the way, you can switch control to your bird companion to gain access to areas and switches that are unreachable by land. 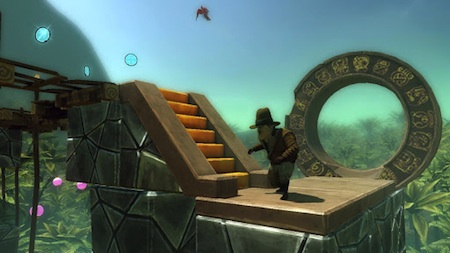 As its name suggests, one of Hamilton's Great Adventure's key strengths is its Tegra-enhanced visuals. This means that those with Tegra 3-packing handsets, like the HTC One X or the Google Nexus 7, will be able to fully enjoy the game's gorgeous 3D jungles and snowy tundras.

It's actually a conversion of a PC and console game - the abundance of detailed textures and pretty lighting effects betray its origins from the start, truth be told. Unfortunately, the whole 'THD' bit is also the game's biggest limitation - no Tegra 3, no dice.

Still, for the Android owners that can run the game, Hamilton's Great Adventure THD looks like a splendid slice of Saturday matinée (with a twist of brain activity) action.