Not content to beat his fellow combatants into submission with a big stick, Rolento can also lob knives and even grenades at his foes. We're not sure how fair this tactic is on the unarmed pugilists, but it's certainly effective. 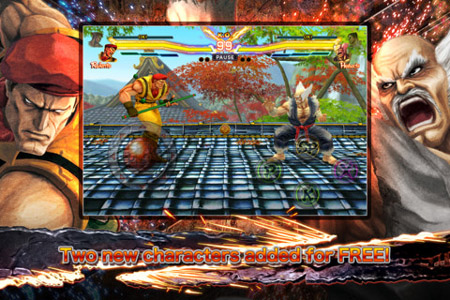 Lending his fighting talents to the Tekken camp, meanwhile, is the King of the Iron Fist Tournament creator himself, Heihachi Mishima.

Don't be fooled by his amusing hairdo, though: Mr Mishima has proven himself a fierce opponent throughout the Tekken series. He's so ridiculously hard that he turned up in Soul Calibur II without a weapon. What a big bloody man.

If you have yet to pick up the Pocket Gamer Gold Award-winning Street Fighter X Tekken Mobile and fancy seeing these new fighters going head-to-head on your iOS device, the game is currently on sale for 69p / 99c.

The Walking Dead: The Game season finale shuffles onto iPhone and iPad

Capcom slashes the price of Marvel vs. Capcom 2 and Street Fighter X Tekken Mobile in honour of Father's Day