Is it a phone, is it a tablet?

We went over all that with the original Galaxy Note. There's no point repeating it, because the Note 2 is mostly an update to bring the hardware up to current standards. If you didn't 'get' the original, you're not going to be a fan of this either.

However, Samsung has managed to carve itself a nice chunk of the market, so with a few big improvements it might raise a few eyebrows this time around. 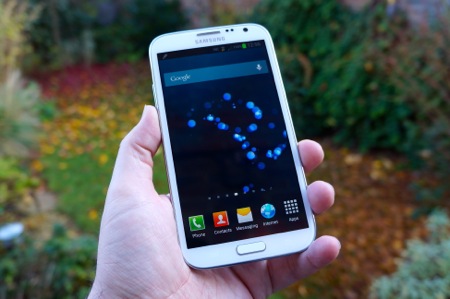 First of all, the Galaxy Note 2 gets a processor boost. It wasn't slow before, but now it's got a quad-core Exynos processor, clocked at 1.6GHz. The screen switches from 1280x800 (a more traditional table size) to 1280x720 pixels, while NFC now makes an appearance.

You also get all of the wi-fi features, like Wi-Fi Direct and AllShare, letting you connect to smart televisions and other suitably equipped devices.

The improved S Pen now has a large range of different pressure levels to aid drawing, and you get a warning if you leave the pen behind when you walk off.

There's also a huge 3,100mAh battery, so you'll get an entire day of usage out of it even if you use it a lot. If you do somehow manage to consume all the juice more quickly than that you can swap the battery with another fully charged one in no time.

Amazon is full of third-party batteries costing £15 or less, but beware of the sellers claiming to sell batteries that boost the capacity by seemingly unbelievable amounts. If there had been room for more battery cells, Samsung would have included them in the first place. 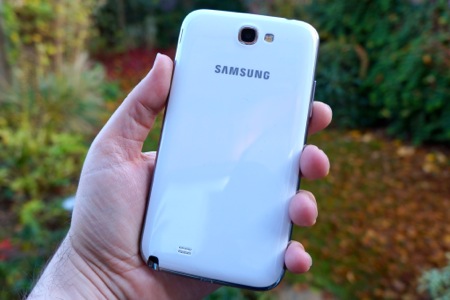 You can further boost the battery life, should you be away from a means of charging for a long period of time, by activating a series of power-saving modes that can throttle the processing power and dim the screen. In over a week of testing, I never found this to be necessary.

Another new feature for the pen is its ability to perform functions when hovering over the display, such as opening up a folder in the gallery to preview the content. You can also quickly cut around anything on the display to copy it to the clipboard, or share it with any app that offers sharing.

This makes it easy to pick out snippets from websites and galleries, or alternatively grab an entire screenshot, add some annotations, and throw it into a document, picked out from a range of templates. 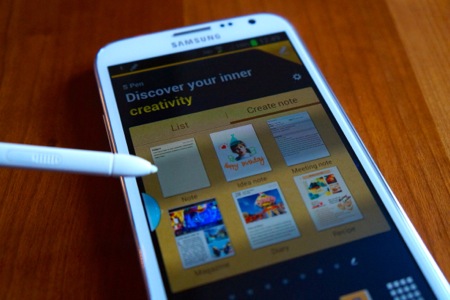 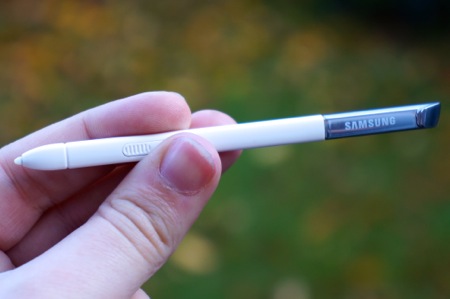 Gets the job done

The Note 2 isn't sold purely as a business device, but it certainly offers a lot more flexibility with the addition of the pen. It makes you wonder why the stylus was so quickly dismissed when capacitive touchscreens came along, when the simple answer was to come up with something that works with both a finger and pen.

Because the Note 2 has such a large screen, Samsung has added an option to reduce the size of the on-screen keyboard, shifting it over so you can reach every key with your thumb without having to resort to two-handed usage.

It means it's as easy to use as any smaller smartphone, although the top-left (or right) of the screen is still likely to be out of reach. 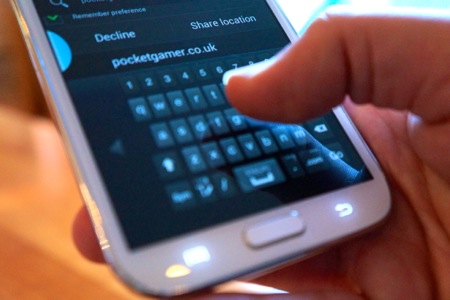 The option to reduce the keyboard size aids one-handed usage 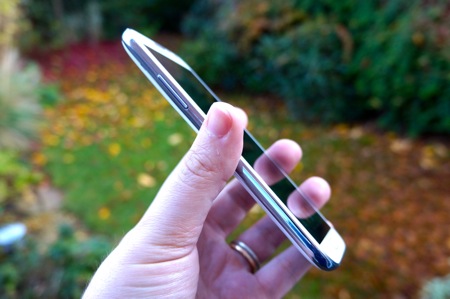 Samsung has thoughtfully opted to put both the 'volume' keys and 'power' button lower down, leaving nothing along the top of the phone besides the 3.5mm headphone jack. Unfortunately, Samsung has an aversion to including camera buttons, so you'll still need to activate the 8-megapixel snapper by launching the camera application.

The camera is another good feature of the phone. It comes complete with a number of shooting modes (including HDR, smile shot, panorama, etc) and the ability to record video and shoot stills at the same time. These are by no means exclusive features, but they're very welcome here.

Indoor shots and photos taken in low light are quite noisy, but the flash is powerful and the images certainly aren't the worst we've seen from a phone. Go outdoors and things improve hugely. Video fares better, too, with full 1080p recording at 30 frames per second on offer.

If the pen isn't something you're particularly interested in, that doesn't make the Note 2 any less useful. You could keep the pen stowed away all the time and still see benefits from a larger screen, such as the split-screen working.

Simply drag an app over to the top or bottom of the screen (or left/right in landscape mode) and you can read your email while watching a YouTube video, looking at photos or surfing the web. 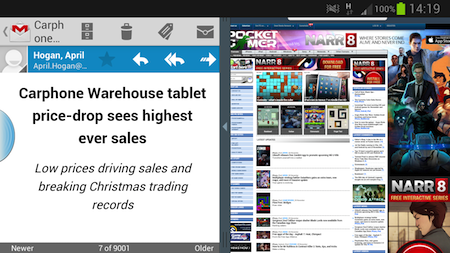 Split screen action: A killer feature of the Galaxy Note 2 (and the full-sized Note 10.1 tablet)

There are floating apps, too, allowing you to do things like watch a video in a small resizeable window on top of other apps. It's worth noting that you can't run all apps in a split screen, and nor will many apps offer the floating option – this is limited primarily to Samsung's own customised apps.

Perhaps the best thing about the Note 2 is that it doesn't break a sweat when performing any of these functions. Another plus is the reduced Samsung user interface customisation. Now that Android is rapidly improving its own look and feel, with strict guidelines to app developers, the days of heavy customisation from TouchWiz (or HTC's Sense UI) are hopefully drawing to a close.

Samsung still includes its hubs and its own app store, as well as a custom lock screen that can show everything from share prices to Facebook updates, but you can quite easily get by using it as a fairly standard Android 4.1 (Jelly Bean) device, which also gives you access to new services like Google Now. 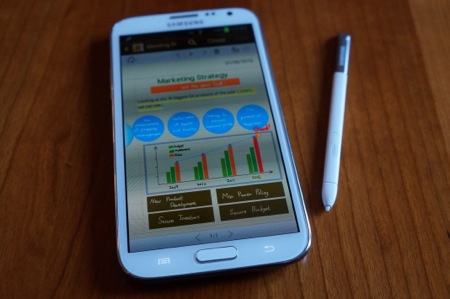 Other features from the Galaxy S III can be found here, too, like the ability to keep the screen on when the front-facing camera detects that you're looking at the screen. Unless you're using the Note 2 in the dark, this feature works really well – along with other motion-controlled functions that you can easily disable if you prefer.

About the only thing that didn't interest me at all was the S Voice function - a copy of Apple's Siri and just about as temperamental. With the speed of being able to fire up a search box, enter text with one hand, and get results in seconds, you probably won't have much need for this feature anyway.

Just like the original Galaxy Note, this isn't a device for everyone. Its high rating is for both filling a niche in the market and being one of the most powerful Android devices around today.

If you don't fully appreciate the benefits of this device, you'll run the risk of getting frustrated by its size. The Note 2 is for you if you want to avoid carrying two devices, if you can see the benefits of a pen, and if you want a handset that lets you both work and play.

Otherwise, the Galaxy S III might be a better option.

Thanks to Vodafone for providing us with our review unit. The 3G model reviewed here supports data speeds of up to 42Mbps using DC-HSPA (3G).

The Galaxy Note 2 is also available with LTE exclusively on EE's 4G network.

The device that originally attracted ridicule from all quarters has now established itself as a worthy device for productivity, and the latest enhancements make the Note 2 an incredibly powerful tool – but it's still not going to be for everyone
By Jonathan Morris
| Nov 22, 2012 |
Mobile
SEE COMMENTS

Hands-on with the Samsung Galaxy Note 2 with S Pen