Hollywood tough guy and Sons of Anarchy actor Danny Trejo is apparently teaming up with Apple co-founder Steve Wozniak on a promotional "tablet" game called Danny Trejo's Vengeance: Woz With A Coz.

Unfortunately, we know very little about this upcoming title, but we presume - based on the game's poster (below) - that it'll be packed to the rafters with bursts of gunfire, random stabbings, and several over-the-top explosions. 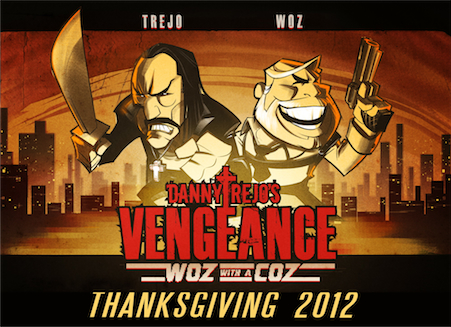 Now, Wozniak may not look like he can punch his way out of a wet paper bag, but sources close to the Dancing with the Stars contestant have told us that he's actually a bit of a badass. Apparently, the Woz can slam a revolving door. 'Nuff said, really.

Danny Trejo's Vengeance: Woz With A Coz will be released to promote upcoming action movie Vengeance, in which Trejo plays a retired cop who is wrongfully jailed following the brutal murder of his family.

It'll be available to download in a couple of weeks for "tablets", which probably means the iPad and loads of Android-powered slates.

Apple co-founder Steve Wozniak now kicking celebrity butt in Vengeance: Woz With A Coz on iOS