With the almost simultaneous launch of Windows 8 and Windows Phone 8, Microsoft has clearly been encouraging manufacturers to think beyond black, white, or silver.

Along with Nokia, HTC has come up with handsets in a range of colours, just in case anyone was thinking of Windows as an operating system primarily for business users.

2012 is the year Microsoft really pushes its new look, helped along by the roll-out of the Modern UI (formerly Metro) to all of its platforms. 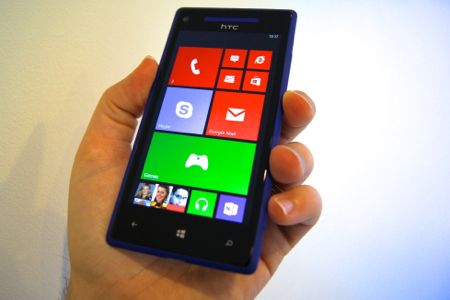 The HTC 8X shows a totally different approach to the one taken with the launch line-up of Windows Phone 7 devices two years ago, which all varied in shape and style but were all far from consumer-friendly.

HTC is certainly not playing safe now, and that's a good thing - depending on how easy it will be to find the colour you want from your chosen retailer or network operator.

The phone is neither too heavy or too big. There's a 4.3-inch screen, which is smaller than the mammoth 4.7-inch screen on the Android-based One X, which you might have assumed HTC would have based this phone on. 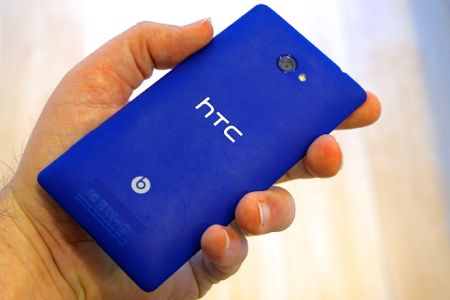 The design is very simplistic, with a curved matt polycarbonate casing in a choice of four colours (including black, blue, lime green/yellow, and red) and the entire front covered in Corning Gorilla Glass.

Along the right-hand side are very thin, but still easily usable, 'volume' and 'camera' buttons, with a 'power' button up top. There's then the slide-out SIM card tray (for a micro SIM), headphone jack, and micro-USB socket.

The 8X feels like a phone that doesn't need to be placed inside any form of protective casing. If dropped, the casing might scratch or dent slightly, but the colour won't chip away. This is not a green light to go smashing it down onto concrete or off a bridge, however.

The future is streaming out to you

You may have noticed that we haven't mentioned a memory card slot. That's because there isn't one. There's 16GB of internal storage, and that's your lot. Although Windows Phone 8 now allows expandable memory, the 8X isn't one of the models to include a card slot.

You do, however, have 7GB of free cloud storage with SkyDrive, and the option to purchase more. Microsoft is no different from the many other companies that believe you will stream more of your content than access locally, which might be something we'd all like to do but can't given limited internet speeds or data caps.

If you were to start streaming everything over mobile data, you'd be limited to a very small number of tariffs.

Although the 8X isn't 4G compatible like Nokia's Lumia 920, it does support DC-HSPA, which can offer data speeds of up to 43Mbps. With a totally unlimited data plan, the idea of streaming music, video, and photo galleries can be a reality, but not for everyone just yet. 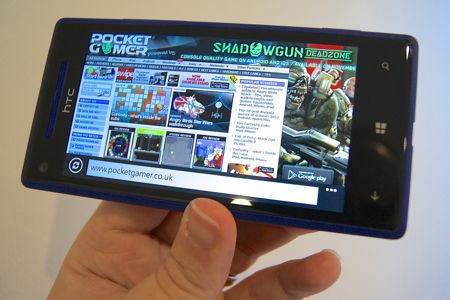 Windows Phone 8, like its predecessor and now Microsoft's new desktop OS, is all about tiles, colours, and personalisation. The result is something that's significantly different from Apple and Google's respective offerings.

There's no icon grid in the form that many people will be used to, but rather a totally customisable grid on the smartscreen made up of application icons and Live Tiles. These can now be resized and moved around in any order you want, which is a big improvement over version 7.

Information from each tile can effectively replicate the actions of a widget on Android, but in a more controlled environment to stop things looking messy and out of place.

Unfortunately, this simplicity could also be one reason that some people will be turned off by Windows Phone - something Microsoft must hope will change over time as consumers grow familiar with the similar Modern user interface in Windows 8.

A swipe to the left reveals the full application list, and everything is controlled though the touchscreen, a 'back' button (which doubles as a 'recent apps' button when held), a 'home' key (which doubles as a voice control key), and a 'search' button. It's all very simple, and thanks to the strict guidelines on app design everything works in a consistent fashion.

You can find out more about the OS in our 10 things we learnt about Windows Phone 8 feature. 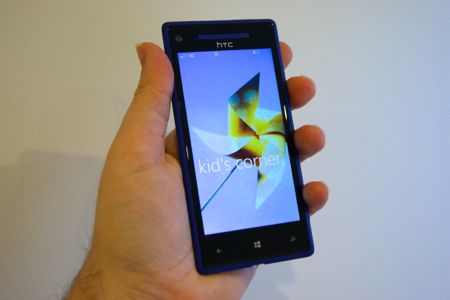 Easy to set up

If you never tried Windows Phone before, it really is an operating system that you can get to learn in a few hours. But the real power doesn't become evident until you set it up with your own data - not only your phone book and calendar, but also your Facebook, Twitter, and LinkedIn accounts, as well as Skype.

This is where Windows Phone comes into its own, and a powerful device like the 8X with its 1280x720 pixel HD display makes the experience better still.

Once you've set up your accounts - all managed from one single Windows login - your phone will begin to collect data about you, your friends, and your contacts. You can then see updates without loading separate applications, and communicate within private groups or 'rooms' designed for close friends and family.

Every Windows Phone also has a dedicated 'camera' key, which can be used even when the handset is locked. Thanks to the faster processor, the camera now starts up more quickly than on previous Windows Phone models, but not quite as quickly as on the Sony Xperia T, or Motorola's lightning-quick Razr i.

Being able to quickly start the camera can mean the difference between getting a photo or not, but you also want to get a good picture. The 8-megapixel camera is equipped with a bright LED flash and there are a range of camera modes, including additional 'lenses' that you can download to add in further features, like new camera effects.

Video recording offers full-HD (1080p) capture, and the front-facing camera is unique in that it offers a wide-angle view, designed specifically to allow group video via Skype. This is an excellent feature - one of those innovations that makes you wonder why nobody thought of it before.

Better still, the camera is also HD quality to further improve those video calls, even if it's a feature a lot of people won't actually use at all.

When multi-tasking was added to Windows Phone, Microsoft placed restrictions on what apps could do when they were in the background. This saved battery life, but also effectively stopped many apps from functioning properly. It made apps like Skype virtually useless, as you stopped getting updates until you resumed. 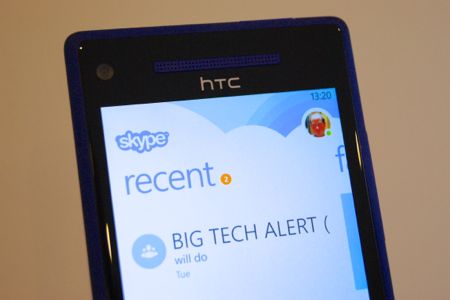 Skype is now not only usable, but it's a service that everyone is likely to want to use now

This time around, Microsoft has updated Skype to receive push notifications, much like Twitter and Facebook, enabling you to keep Skype logged in and online all of the time without any significant impact on the battery at all in standby.

It means you can now be easily reached by Skype for a voice or video call, and you can communicate with instant messaging and not worry about your battery dying in a matter of hours - an issue Android users will no doubt be fully aware of. 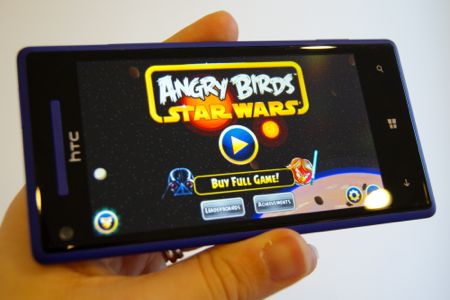 Tucked away inside the phone is a 1,800mAh battery which isn't as large as I'd have liked it to be. Despite Microsoft's efforts to reduce power consumption, many apps and most games will drain power as fast as any other phone - even Qualcomm's latest generation S4 processor.

Fortunately, my fears were partially allayed over the week of testing. The phone did seem to manage pretty well - even when I spent a great deal of one day playing Angry Birds Star Wars.

And it's worth mentioning at this point that Windows Phone has an ever increasing collection of games. While many will cost you money here, compared to the growing choice of freemium titles elsewhere, they are nearly always highly polished and optimised thanks to those tight controls put in place years go to ensure the hardware would always be of a sufficient standard. 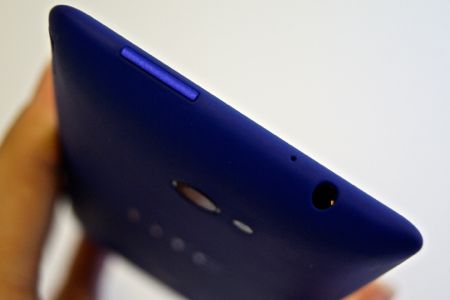 And when it comes to the 8X, HTC has maintained that high standard and combined it with a stylish design to create one of the most exciting phones I've used in some time.

HTC has produced a high-quality phone that gives Microsoft everything it needs to show off the new operating system in its best light. There's a great camera and the battery performed well, despite my initial fears. With Qualcomm's latest processor and a lovely HD screen, plus a choice of funky colours for the more adventurous, it's one to check out
By Jonathan Morris
| Nov 15, 2012 |
Mobile
SEE COMMENTS

HTC and Microsoft reveal the Windows Phone 8X and 8S