Android 4.2 out now for Galaxy Nexus, Nexus 7, and other devices

Good news, Android-loving mobile folks: Google has just released version 4.2 of its popular mobile operating system, which is still technically called Jelly Bean. In The Big G's own words, though, it's "a new flavour of Jelly Bean." Exactly.

For starters, Android 4.2 supports multiple user accounts on tablets. This means everyone that lays their mitts on your touchscreen slate can have a personalised home screen and background, as well as a unique collection of widgets, apps, and games.

With 4.2 installed on your 'droid device, you are also able to share movies, show off comical YouTube videos, and mirror your device's display on any HDMI-enabled TV via a wireless display adapter. 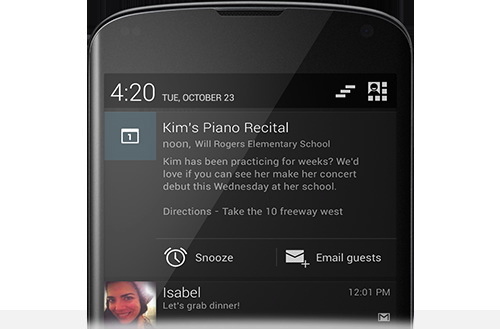 Other new additions in Android 4.2 include Daydream, which allows your device to display useful information and photos on-screen when it's idle or docked, and gesture-based typing.

You can now also send emails and perform other actions directly from inside your device's notifications shade, and snap 360-degree photos thanks to Android's new Photo Sphere feature.

Android 4.2 is currently available to download for the Galaxy Nexus and the Nexus 7. The Nexus 4 and the Nexus 10, both of which went on sale in the UK today, can also benefit from this update.

This update should hit Samsung's Galaxy S III next month.

Sponsored Feature: Mobe Labb on how Wars Online - Defend Your Kingdom on iOS and Android isn't as formulaic as you'd think