Ain't gonna be no rematch

For a game without swords or guns, there sure is a lot of blood in Real Boxing.

These muscly boxers, covered in Unreal Engine sweat, are like blood-filled pinata, spraying out haemoglobins at the lightest punch. Every single blow, even if it's just a fist to the belly, results in a glorious shower of blood.

To be fair, these are particularly brutal bouts. They're a constant barrage of jabs to the face, uppercuts to the chin, and hooks to the head - all delivered through a series of intuitive touchscreen gestures.

Real Boxing is a bit like Infinity Blade, as you make daring attacks, try and read your opponent's animations for tells, and decide whether to block or dodge those incoming blows.

But these are not neat and tidy fights, and you can't systematically deflect each incoming punch to fight a perfect battle. This is hot and heavy - you'll get slugged in the face, you'll flail your limbs about like a wet fish, and you'll try fearsome counter-attacks that just don't pay off. 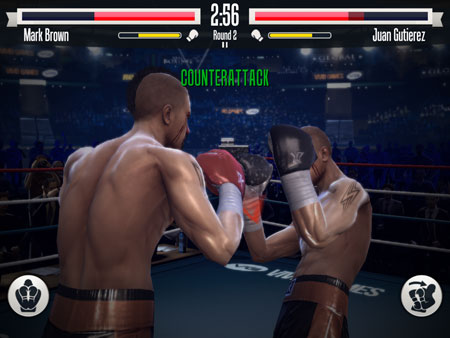 That last one is a weird quirk. You see, you can dodge incoming attacks, and if you get the timing right you'll be offered the chance to land a counter blow for massive amounts of damage. But your opponent can counter your counter, and it seems impossible to block or dodge that attack.

So, your opportunity for a show-stopping haymaker too often ends up being thrown back in your face. Literally. Even after dozens of fights, after mastering the controls, and after rising through the game's career mode, I still get caught out by my own counters.

The game will have quick fights, a multiplayer mode, and a career in which you'll go head-to-head with progressively more fearsome dudes.

Before each career battle you'll be able to see your stats compared with your opponents - top trumps style. If you're outnumbered in any particular area (speed, strength, or stamina) you can hit the gym and play simple mini-games to boost your stats. 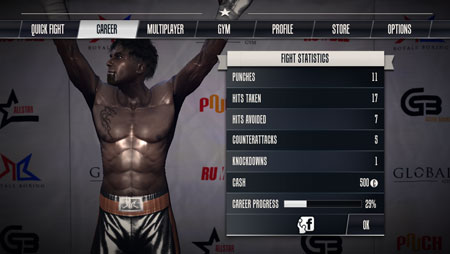 But there's a catch - to stop you from grinding away at the gym until you're an unstoppable killing machine the game only lets you work out once every five-or-so fights. Of course, there's no limit to simply buying your way to buffness with in-app purchases.

One highly publicised feature of Real Boxing is that it has a camera-controlled input mode that lets you play with your body, which Vivid's PR team told me works like Kinect. I guess that's pretty accurate - like the Xbox gizmo, this feature barely works.

It registers about one in ten inputs, doesn't explain itself, and you have to stand so far back from your iPhone you'll need binoculars to see the screen. Even if you hook your iOS device up to Apple TV, it just doesn't work as intended. Also, it makes you look like a jackass.

But turn that off and you'll find a pretty competent fighter in Real Boxing. There's something about the tactile controls, the to-and-fro of the battles, the gruesome sound of each blow, and - yes - even the blood that makes each bout feel very satisfying.

Real Boxing should hit the App Store some time this month. We'll have a review of this iPhone and iPad game, but until then this is a title fight that boxing fans should look forward to.