Behind the scenes with Angry Birds Star Wars

Much to learn, you still have

In honour of the launch of Angry Birds Star Wars, members of both Rovio and Lucasfilm gathered together in the IGN Entertainment offices to share some insider info with the Google+ crowd.

The discussion, broadcast live within a Google+ hangout, touched on everything from the balance of Angry Bird vs. Angry Birds Space content in the game, to the repositioning of Chewy's bandolier.

"We knew from the beginning that we had to have some [Angry Birds] Space in it", explained Rovio's Mikko Hakkinen.

"So, we tried to pick up the best pieces from the classic Angry Birds games and Angry Birds Space, and combine them together." 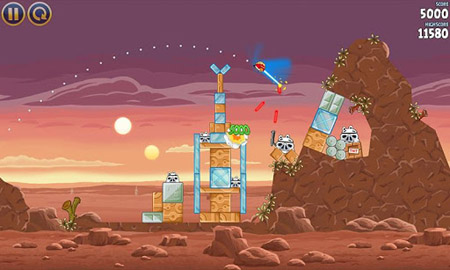 According to Hakkinen, the switch between the old skool, ground-based gameplay and the more recent outer space action was largely dictated by the demands of the Star Wars narrative.

"It kinda follows the story in the movies", the Angry Birds Star Wars producer revealed. "When you're on the surface of the planet you’ll have more classic gameplay, but when you go to space it’ll move to zero gravity."

In an effort to bring the authentic Star Wars atmosphere to the Angry Birds universe, both Rovio and Lucasfilm took a long, hard look at Lucas's sci-fi world, and tried to cherry pick what they considered quintessential Star Wars elements.

"What is really iconic for the Star Wars movies is blaster fire", Hakkinen continued. "Lasers going everywhere. They don’t necessarily hit anything, but they bounce around from the ceilings and stuff like that."

"We really wanted to have that incorporated in the game as well, so this is the first time that the pigs get to fight back. They actually shoot lasers at you." 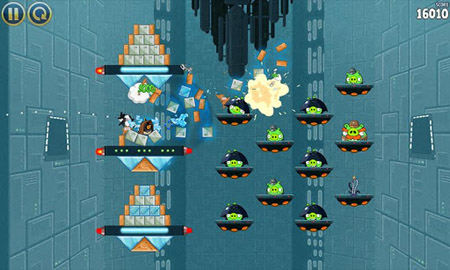 Of course, making a Star Wars game ain't like dusting crops. There were issues to contend with, particularly relating to character design.

"Things have to be simplified", art director Toni Kysenius explained. "What is the right amount of detail to put into Han Solo's gun, for example?"

Another issue presented itself when the art team tried to render the Terrence, who has assumed the role of Chewbacca for this Angry Birds adventure.

As Kysenius explains: "Our gameplay goes from left to right, and we had discussions like 'Hey, your gameplay Chewy has the belt going the wrong way. Why is that?'"

"But we also had to decide that in all the products and all the marketing graphics, the belt will be the right way around." 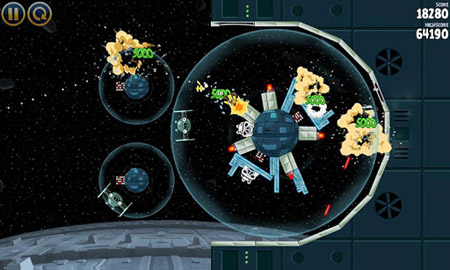 One essential ingredient of both the Angry Birds and Star Wars phenomenons is the fans, something which Lucasfilm marketing director Matt Shell was keen to point out.

"Being true to the fans is very important", Shell enthused. "We're never going to make everybody happy. There are some things that will be aimed at certain fans, some at others."

So, what will the fans make of this franchise hybrid? "When you get your hands on [Angry Birds Star Wars] it feels good. It feels natural. It feels right."

If you want to make up your own mind, you can find Angry Birds Star Wars on iOS, Android, and Windows Phone now.