ZiGGURAT developer's TNNS is Breakout by way of Super Hexagon

Rogers and co put this game out without fanfare. "Our new game is on the App Store," the designer wrote on Twitter. "Since we didn't announce the name yet, most people can't even search for it."

Well, it's called TNNS. It's like Breakout (or Alleyway or Arkanoid), but you have the telekinetic power to bend and morph the trajectory of the ball once it has pinged off your paddle (like Shatter, on PSN). You'll use this extra force to collect stars, smash blocks, shove bricks, and finish the level.

The game boasts 500 unique and hand-crafted stages that are offered up at random. Sometimes they have arrows that shoot your ball in different directions, or black holes that suck up your pinball and shoot it out somewhere else. There are power-ups and, of course, that all-important multi-ball.

It can be frustrating. Like any take on Breakout, even having influence over your ball's trajectory doesn't stop you from getting stuck in situations where you just keep missing that final block. And a lot of times you'll miss bopping back the ball by a hair's width.

But, like Super Hexagon, you'll probably hear the call of "again", and compulsively start a fresh run. 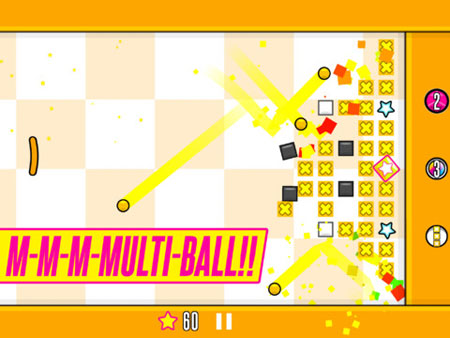 TNNS hasn't quite won me over. It's different and it's addictive, but it can also be frustrating. And, at the end of the day, its Breakout - which is probably the worst arcade classic that every indie dev feels the need to spin-off at some point in their career.

But, if you loved ZiGGURAT and you want to see what's next, it's right here. Bouncing off the god-damn wall.

It's got all the usual stuff you can expect from a game in 2012 - objectives, Twitter and Facebook support, in-app purchases, and a multiplayer mode for two players on the same device. The game is £1.49 / $1.99. It's universal, and optimised for iPhone 5.

Oh, and it's pronounced "Tennis".

Boulder Dash-XL is on its way to iOS

All your cats are belong to us