On Monday night, Microsoft placed the final piece in the Windows 8 puzzle with the official launch of Windows Phone 8 - a platform that looks to unify the company's efforts across PC, Xbox, and mobile.

Set to hit store shelves at the end of this week, the new Windows Phone 8 devices will be sold under the banner of "the smartphone reinvented around you", and will be backed up by a significant advertising campaign that will kick off ahead of Christmas.

Before that, though, let's run you through the top ten things we learnt about the latest iteration of Microsoft's mobile operating system from the launch event on Monday.

In no particular order. 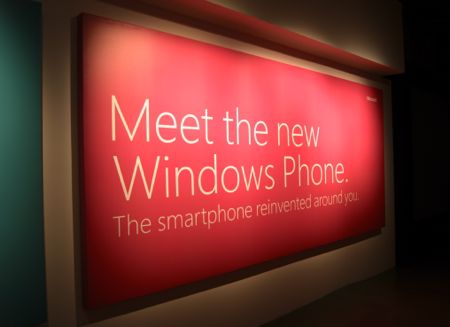 According to Joe Belfiore, corporate VP for Windows Phone, no two phones should ever be the same.

To that end, Belfiore pointed to the customisation potential of the tile-based home screen on Windows Phone 8 devices. These live tiles aren't new, of course, though you can now fit more of them on your screen and resize them to your needs.

On the subject of 'new', apps can now directly update your lock screen with fresh info and photos. By way of example, we were introduced to the new Facebook app, which can take over the whole lock screen if you want, displaying a collage of photos, full-screen shots, or updates.

Continuing the theme of "Powered by Live Apps", Belfiore announced a new Skype app for Windows Phone 8. Instead of Skype just being a separate application running in the background, it's now always on and ready to receive calls and messages at any time.

Data Sense is another new core feature. This new component of Windows Phone 8 doesn't just help you keep track of your data usage, but also helps you seek out wi-fi hotspots that you can use to reduce your mobile data consumption.

In terms of software, Microsoft is promising that 46 of the 50 most widely used apps on smartphones will be available on Windows Phone 8.

Microsoft also unveiled a new "Kid's Corner" feature during the Windows Phone 8 launch event. Kid's Corner is designed to deal with those 'Daddy, can I play on your phone?' moments where you're left in fear of what will happen to the data on your phone after your teenager grabs hold of it.

Windows Phone 8 comes with this feature as standard, allowing parents to control and manage what games, music, and apps their offspring can gain access to. Simple, but effective.

Kid's Corner was championed by movie star and mum-of-two Jessica Alba, who made a guest appearance on stage at the San Francisco launch event to help promote this safeguard feature.

In the People Hub on Windows Phone 8 handsets, you won't fail to notice the new "rooms" component. As you'd expect from a feature with that name, you can now create individual rooms for specific groups, e.g. close friends or immediate family (a family room will be preset on every new phone).

Within each room, you can chat, send your location, and share photos privately. Everyone in the room can see everything, allowing you to share notes and lists in one hit.

These rooms should prove extremely useful for anyone with hundreds of contacts in his / her address book.

8. Take me to the cloud above

This means that users of the SkyDrive service - who get 7GB of free storage out of the box - will be able to gain access to these uploaded files from any Windows device. Seamless, eh.

Microsoft also showed some love to its new Xbox Music service and the recently released SmartGlass application. The latter allows you to control your Xbox from your phone and interact with content on the second screen.

At launch, there will be five Windows Phone 8-powered handsets available. Two from Nokia, two from HTC, and one from Samsung. Read all about them here.

Halloween trailer for Castlevania: Lords of Shadow - Mirror of Fate