With Windows 8 now officially on sale and Windows Phone 8 formally launched last night at Microsoft's San Francisco event, the times they are a-changing over at Redmond.

On the subject of Microsoft's new Windows operating system, I was recently able to play with the forthcoming Asus Vivo Tab RT (in addition to the Android-based Padfone 2).

First off, I ought to point out that the Vivo Tab RT runs Windows RT, a version of the Windows 8 operating system for ARM devices, such as the Microsoft Surface.

For the uninitiated, Windows 8 offers a new-look user interface that encourages you to tap, swipe, pinch, swipe again and pull. And for anyone still confused about the difference between Windows 8 and Windows RT, read this.

As you may or may not know, Windows RT tablets like the Vivo Tab RT only run apps that are available in the Windows Store.

And as of today, there's not a lot of choice (even Office ships as a preview with a free update to the complete version later) in this new Windows marketplace, but that situation should improve given the amount of money Microsoft is pumping into marketing Windows 8.

Clearly, though, despite the initially limited selection of Windows RT content, the reduced power demands of hardware used to make smartphones and tablets should make Windows RT the operating system of choice for people on the move.

Windows RT will also stand a better chance of success if developers work hard to produce RT apps and games as quickly as possible, thus enabling users to finally give up the old and welcome in the new. 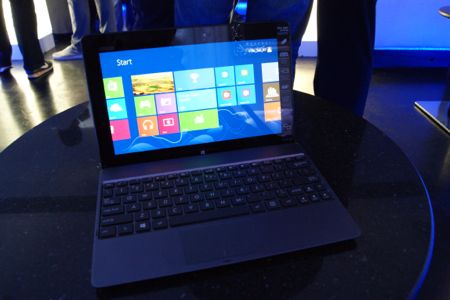 The look of the Vivo Tab RT might seem rather familiar, and that's because this tablet / keyboard combo isn't a new idea for Asus. It has performed exactly the same trick before in the Android space with its Transformer line, so it's hardly surprising to see a hybrid device like this rolled out on another platform.

Without the dock, the Vivo Tab RT is a pretty impressive tablet full stop. It's extremely slim at just 8.3mm, but fairly heavy (525g) due to the metal casing.

Rather handily, the keyboard dock contains its own battery, meaning that a docked Vivo Tab RT can expect to see its battery life increased from nine hours to a pretty impressive 16 hours.

Naturally, you'll have to wait until we get to review it properly to see if these claims are anywhere near realistic in the real world. 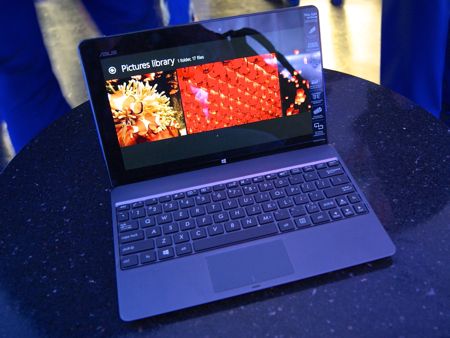 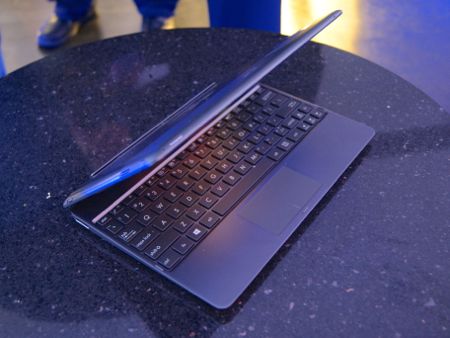 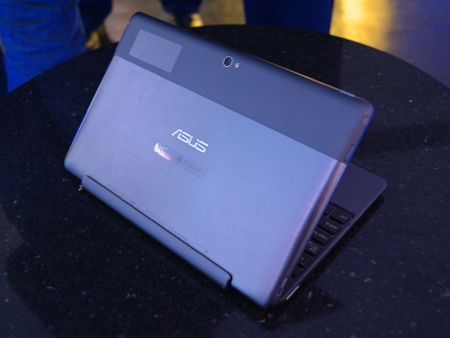 As with Asus's Android tablet / laptop hybrid devices, the Taiwanese manufacturer has paid a lot of attention to the Vivo Tab RT's design to ensure that when you detach the tablet from the keyboard, there are no obvious signs that it is 'missing' a keyboard. And when docked, it really does look like it is a permanent attachment.

The Vivo Tab RT's 10.1-inch display has a 1366x768 pixel resolution, offers an enhanced brightness option for outdoor use, and is protected by Corning scratch-resistant glass.

Under the Vivo Tab RT's hood, you have a quad-core Nvidia Tegra 3 chipset, 2GB of high-speed RAM, and the option of adding 3G (with DC-HSPA support for data speeds of up to 43Mbps) to the standard wi-fi connectivity.

You also get 64GB of storage, an 8-megapixel camera, HDMI output, and quad-speakers for improved audio playback. 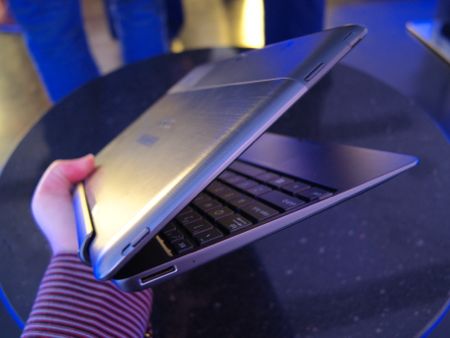 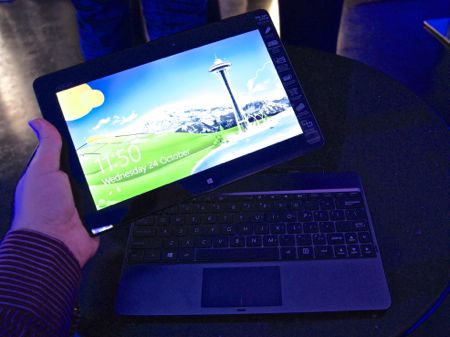 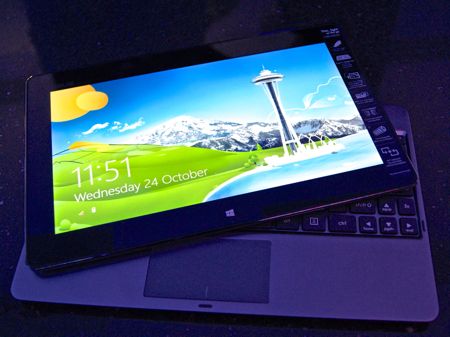 Asus has even thrown NFC in, which makes it ready for tapping against smart tags, compatible with NFC-enabled accessories, and capable of reading certain smartcards.

Unfortunately, I couldn't go online with the Vivo Tab RT I tried out, due to the lack of an internet connection in the demonstration building. This somewhat limited my ability to try Windows RT out properly.

But, what I could determine from my hands-on impression was that this is a device that was easy to operate and extremely responsive, so it all looks pretty promising.

The good news is we shouldn't have to wait long until we get our review model and subject it to the full Pocket Gamer test. This will include a side-by-side comparison with the Microsoft Surface with Windows RT tablet, which we will be looking at separately soon.

UK telcos Three and Vodafone have confirmed they will sell the 3G-enabled version of the Vivo Tab RT, with other carriers likely to follow.

Pricing is pretty close to that of the Microsoft Surface with Windows RT, so a 32GB wi-fi only Vivo Tab RT will probably retail for around £370, while a 64GB model should set you back £430. (The keyboard dock is included in that price, incidentally).

The pricing of the 3G models will be announced shortly.

He-Man: The Most Powerful Game in the Universe