If you want evidence that mobile games are turning into their console and PC cousins, then look no further than Shadowgun: Dead Zone.

Developer Madfinger Games has gone down the distinctly PC route of offering an open beta of its free-to-play multiplayer shooter, giving the team a chance to tweak the title behind the scenes and the players a chance to frag one another in the face.

We’ve been giving the Android-exclusive a thorough testing over the past week and can safely report that, while it’s a little rough around the edges, its shaping up to be one of the most robust shooters on Google Play.

Moreover, it has a weapon called the Sh*tstorm.

With the beta being limited to mobile gamers in possession of Nvidia’s Tegra 3 chip-powered handsets, you might think that player numbers might be a little low for DeadZone. In fact, the servers have been crammed since launch and show just how much the ‘droid community is clamouring for shooter to call its own.

A follow-up, or extension, of the massively successful original game Shadowgun – the closest you’ll get to Gears of War on a mobile – DeadZone switches cover-based, single-player blasting for more full-on action.

Only two modes are available in the beta, a standard Deathmatch arena battle and a Zone Control stage (across which rival Red and Blue forces battle to seize all the flags on the stage).

Both are heavily derivative of the gameplay of veteran multiplayer franchises like Unreal Tournament and Quake III: Arena, and gamers looking for a trailblazing take on online blasting are going to be left wanting.

Anyone happy enough to simply go through the death-bringing motions on a top spec mobile handset or tablet instead of collapsed in front of a telly on the couch (although both are still possible with the right cable connections, and a couch), should be as pleased as punch. 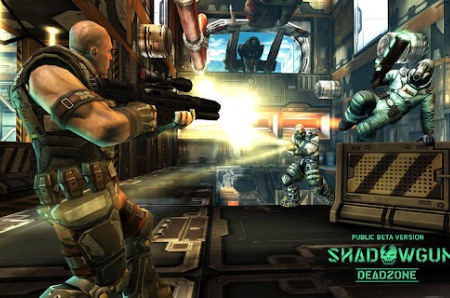 Powered by the Unity3D engine, the game’s metallic aesthetic and chunky Unreal-like character models still make Shadowzone one of the most visual dazzling titles available. You get to pick from four character models (Soldier, Mutant, Dancer, Assassin), with the lithe-limbed lady Dancer being, unsurprisingly, the most scantily clad of the group.

Core, the Deathmatch map chosen for beta, is a small location, packed with chest-high walls and corners to seek cover behind, making it ideal for the 12-player matches.

Unfortunately, most of this meticulously placed scenery is wasted, as players just run around at full pelt firing off pot shots at one another rather than playing a tactical game of bullet riddled hide-and-seek.

The main source of tactical challenge is in your choice of weapon load-out and buffs. You can carry a trio of guns from a selection of seven, along with a further three buffs to deploy during matches – from health packs to camping-friendly sentry guns.

Trigger-happy pocket gamers will be pleased to discover that all the weapons pack a hefty punch, though the ammo-limited RPG (the aforementioned Sh*tstorm) being the most devastating, and devastatingly popular, choice.

It’s fun to tinker with your loadout in Deathmatch, but it’s in Zone Control mode that your choices can make a real difference to the outcome of a match.

Defensive players, for example, can use sentry guns and rifles to defend flags, while gung ho attackers storm ahead with RPGs and health packs to patch themselves up with on the fly. 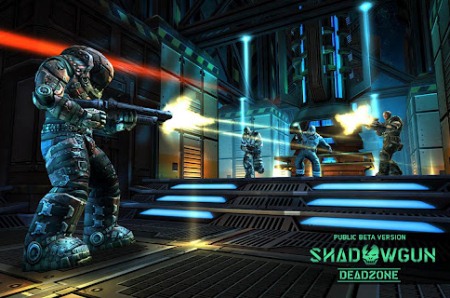 There's no firm release date for Shadowgun: DeadZone, but it feels close to finished.

We had a couple of matches in which enemy player animations didn’t work, making them look like floating marionettes, but the net code was robust enough that lag was mostly minimal and no drop-outs occurred.

Obviously, the open beta offers only a flavour of the full game, so we can only hope that the final version retains its polish, plays fair over pricing, and offers more variety in its maps.

Fighting Fantasy: Blood of the Zombies

Shadowgun: DeadZone has been opened up for its community to create new maps and mods

Over 1000 players petition against Shadowgun: DeadZone due to lack of fixes and updates