The new site, as its name suggests, is set to cover the "buzz surrounding the growing market of smart and connected televisions", as well as the hardware that brings smart TV capabilities to the older sets already gathering dust in people's homes.

According to Steel Media, Smart TV Radar has been designed to represent the "revolution in how television content is consumed by establishing a viewing platform that operates outside of traditional scheduling constraints."

There will also be room to cover the games and apps also popping up on televisions aplenty, tapping into the publisher's esteemed knowledge in the area. 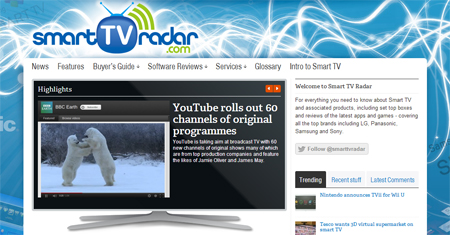 "Smart TV is set to become a part of all our lives, especially with the increased involvement from the likes of Google and Apple, plus growing support from the top content providers, broadcasters and game developers," said Smart TV Radar editor Jonathan Morris.

"With a highly fragmented industry that sees multiple platforms to choose form, it’s hardly surprising so many people are confused and uncertain on what to buy, or when.

"This was the sole reason for launching Smart TV Radar as a definitive resource to cover all of the choices out there, as well as reviewing the content, apps and games for those who have already taken the plunge."

"Having enjoyed massive success in the mobile gaming sector doesn't mean we're not able or willing to expand into other exciting areas where we feel we can apply our in-house expertise," added James.

"Smart TV is a sector with a very promising future – indeed, one that ties effortlessly into our current editorial remit – and in Jonathan we have someone who is perfectly suited to drive this new addition to our portfolio."

You can find out more for yourself, of course, by popping over to Smart TV Radar now.