We've been waiting quite a while for the retro-styled, Grand Theft Auto-like, parody-filled Retro City Rampage to race onto our PS Vitas.

Well, it looks like we won't have to wait much longer, as the game is set to hit the PlayStation Store later this month.

In case you somehow missed it before, Retro City Rampage throws you onto the streets, puts a gun in your hand, and invites you to drive around completing missions.

Don't compare it too much to Grand Theft Auto, mind, for this is a far more jovial experience than Rockstar's open-world franchise.

In Retro City Rampage for Vita, then, you can expect a very silly story; nods to other games and films all over the place; and lots of general wackiness. 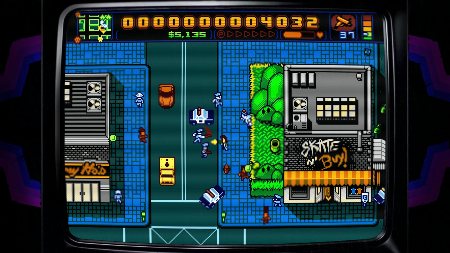 The game is scheduled to debut in the US on October 9th, Retro City Rampage creator Brian Provinciano told us.

Provinciano also stated that the "EU PS3 / Vita date's still not 100 per cent nailed down, but it's likely to be either the week or second week following the US release. It's in certification and should be through soon."