The iPhone 5 is possibly the first of Apple's phones to spark controversy before even going on sale (since the iPhone 4, at least).

There was never going to be much that Apple could add to the newest iPhone, but in its first week on sale most of the headlines concerned problems with the Apple Maps app and the handset's exquisitely scratchable casing. 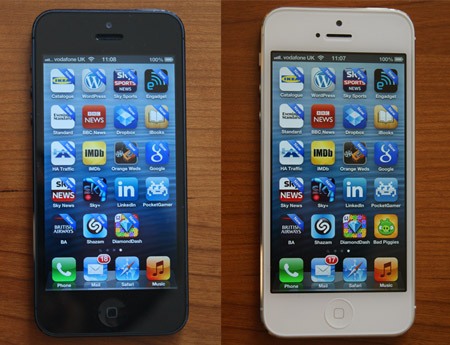 We got a black review sample from Apple, and even our model - presumably checked over in advance - had two very small marks. Almost impossible to see in our photography and certainly not serious defects, but they are still dings that I couldn't fail to notice – just like dead pixels on a LCD display.

Apple has since apologised about Maps and promised to fix it, and if Google releases its own Maps app with Street View all will be forgiven. So, let's get back to the phone.

While I was testing the black iPhone 5, Vodafone sent me a white version for the purpose of comparison. To my eyes, it looks much better.

With the mix of white plastic, glass, chrome, and aluminium, it also has the added benefit of making the blacks look darker as your eyes adjust to the brighter bezel. Sadly, it also shows up the black borders on apps not yet updated for the bigger screen. 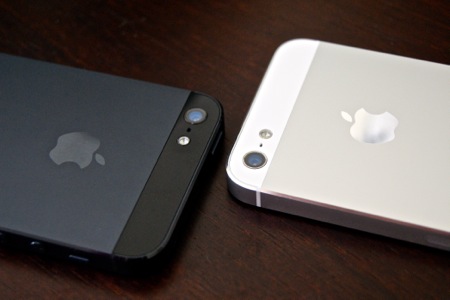 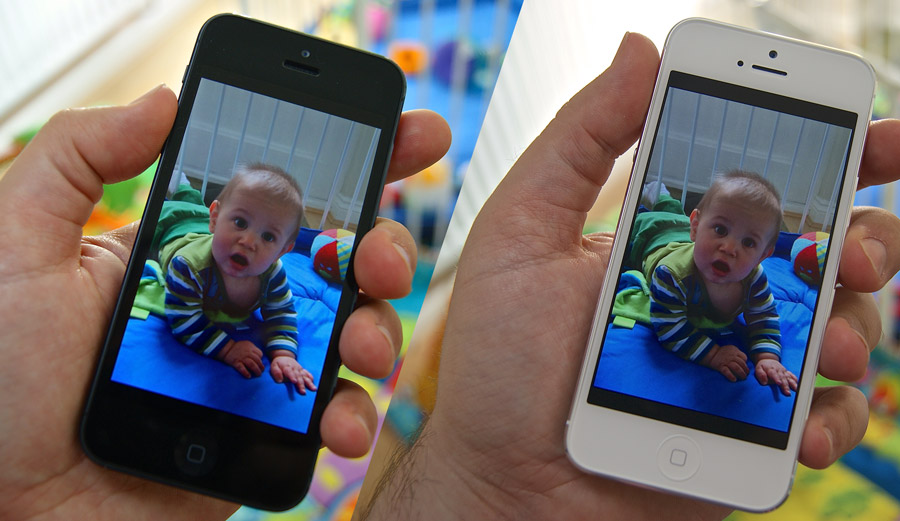 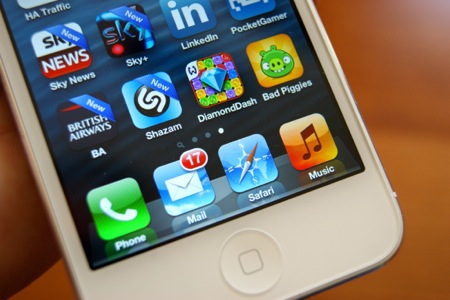 My favourite is the white version. You're allowed to disagree, but why would you?

Opinions may differ on which colour makes the best-looking iPhone, but there's no doubt about the key change distinguishing the iPhone 5 from the 4 and 4S.

Steve Jobs was quite insistent that 3.5 inches was the optimal screen size, so any move to increase it seemed unthinkable until now. With the jump comes an increase in height, although the phone has slimmed down too.

The screen resolution isn't quite 720p, but its now in a widescreen format. The screen has only stretched in one direction in order to make it easier for developers to modify existing apps and games.

Meanwhile, no doubt to appease the ghost of Mr Jobs, the four-inch screen is still sufficiently small to let you still reach the top with your thumb from a normal holding position.

I do believe the screen could have been a little larger without compromising usage, as Motorola has proven with the edge-to-edge screen on the Motorola RAZR i (see comparisons at the end of the review). If Apple ever removes the home key, as has been rumoured, it could probably increase the screen without any impact on the handset footprint. 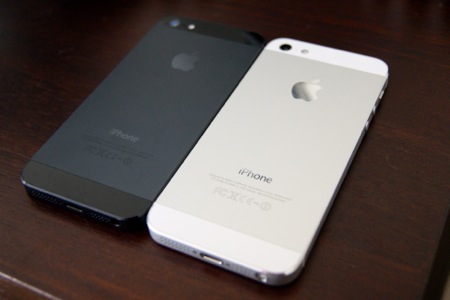 Because the iPhone 5 is so slim and light, you'd be excused for wondering if Apple forgot to fit the battery when you take it out of the box.

Once you've switched it on, you'll be invited to set up the phone and experience iOS 6.

The user interface is beginning to look a little dated these days, and iOS 6 makes the 'settings' menu look incredibly bloated. It's becoming quite clear that Apple is finding it hard to categorise all of the new features, so perhaps iOS 7 will give everything a bit of a facelift. 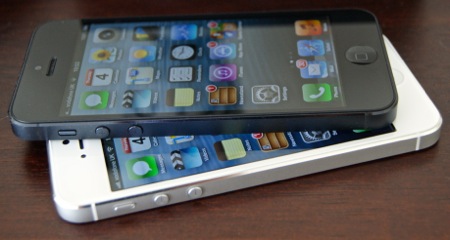 You might not need a manual, but you'll want to spend a good day or two to going through every feature of the phone to look for new things. Or you could just check out our guide to iOS 6.

Clever features like 'Do not Disturb' can make your phone go silent for a meeting, or during set hours, yet allow certain contacts to get through when given VIP status. Another cool feature is the ability to let someone get through if they call more than once in a short space of time (suggesting the message is urgent).

With the added screen height and Apple's latest A6 dual-core processor, developers are gradually updating their apps to use the extra screen space, and it's not hard to see which ones have been done.

If the app hasn't been updated, and that even includes Rovio's Bad Piggies, you'll be stuck with black borders top and bottom. 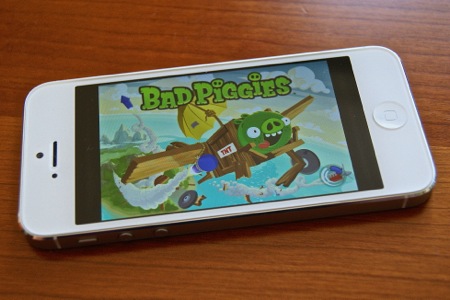 The upgraded dual-core A6 processor, coupled with twice as much RAM (1GB), makes the iPhone 5 the fastest iPhone yet - but neither the 4S nor the 4 was slow.

I couldn't see anything to show off the increased processing speed, and navigating the menus was already buttery-smooth. I can imagine it making a bigger difference to apps that do complex calculations (such as video encoding) than games - but you aren't always going to be playing games, are you?

Then there's the other big change: the new Apple Lightning connector. It's a controversial move, but arguably one that had to happen sooner or later. Every rival manufacturer has been changing to the new micro-USB socket standard, which Apple now supports with yet another adapter that you'll be able to buy separately.

For people who've got a lot of docks or speakers, and a collection of chargers from previously owned iPhones and iPods, it's clearly going to be frustrating.

But it'll all be forgotten in a few years' time, and the new connector (even though it only supports USB 2 speeds) is far easier to connect, since you can plug it in either way around. 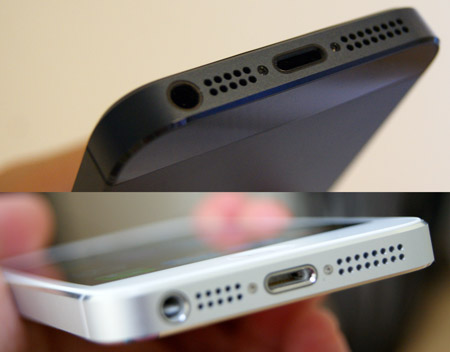 It's easy to use (in a simple sliding motion, with on-screen guidance to tell you to speed up, slow down, and move up or down) and it gives excellent results. The saved image isn't reduced in size, like most other handsets that have the same feature, giving you 28-megapixel images to enjoy on the big screen.

Apple has also, at long last, shipped the iPhone 5 with a decent set of in-ear headphones. No longer will everyone but you get to hear what you're listening to.

With a bigger screen, faster processor, and 4G support - making the iPhone 5 compatible with EE's forthcoming 4G network, which launches at the end of October - you may assume that the battery struggles to keep up. In fact, Apple promised when it announced the iPhone 5 that the battery would be just as good as in previous models.

That's a good or bad thing depending on your usage. In standby, the phone happily runs for hours without losing a significant amount of charge - the tight control on multitasking and power-saving hardware sees to that.

During normal use, however, the power drops whenever you perform even mundane tasks, from downloading new apps to using the web browser. 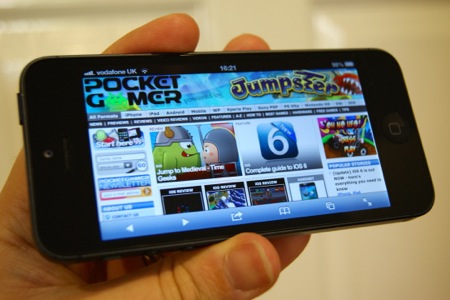 Even simple web browsing can have an impact on the battery

Another sure-fire battery killer is using the tethering mode. Even so, it's so easy to set up and use that you'll be tempted to share the data around – especially if you sign up for 4G.

The question, of course, is whether you need to buy the iPhone 5. Yes and no.

Yes, because the iPhone 5 is the best iPhone on sale today, and the higher resolution screen means you'll get a little bit more from your apps. You'll also get to enjoy movies without borders. It's why the phone scores so highly.

But there's little reason to get one if you've already got an iPhone 4 or 4S (especially the latter). It isn't a must-have upgrade - especially if you update to iOS 6 on your existing iPhone.

If your contract is up and you can upgrade, it's worth considering the iPhone 5. Then again, there's always another model just around the corner. 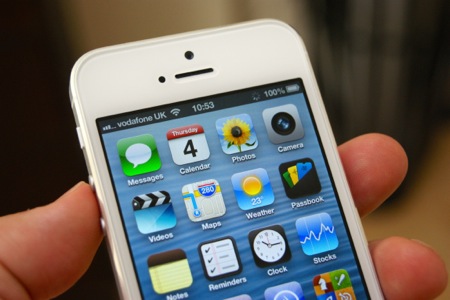 In case you didn't notice before, I preferred the white one

Apple didn't add NFC or wireless charging technology, so there's every chance that one or both will follow with the next iPhone. We might also see a bigger screen using edge-to-edge screen technology. Do you want to be hooked into a 24 month contract if any of these things happen?

If you're not bothered about what Apple might do tomorrow, and you've already invested in the Apple ecosystem, then you won't be disappointed with an iPhone 5. But nor are you likely to be blown away. 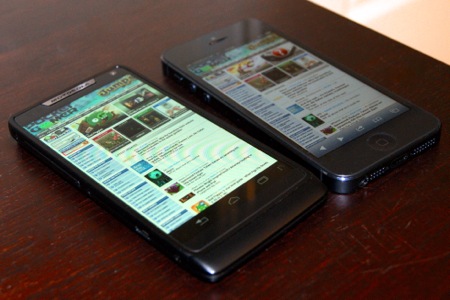 Moto has the edge? Motorola's RAZR i edge-to-edge screen allows a larger screen within a similar footprint. A hint of what Apple might use in the next iPhone?

There are some software issues, which will probably be fixed sooner rather than later, and the black model will require you to buy a protective case, but whatever model you go for Apple has yet again done exactly what it set out to do. It may lack the power to take on the high-end Android models, but how many Android users were about to swap to iOS (or vice versa) anyway?
By Jonathan Morris
| Oct 4, 2012 |
iOS + Mobile

Step into some big shoes

The best games to play on an old, hand-me-down iPhone this Christmas

You can already jailbreak Apple's newly released iOS 6.1.2 with evasi0n 1.4