Intel isn't any old company trying to muscle in on the smartphone and tablet market dominated by ARM. However, while it powers the majority of PCs and Macs, Intel only joined the smartphone market this year.

Despite releasing some Intel-powered handsets earlier in the year, such as the Orange San Diego, it's the Motorola RAZR i that will hopefully tell the world that Intel is ready to compete. 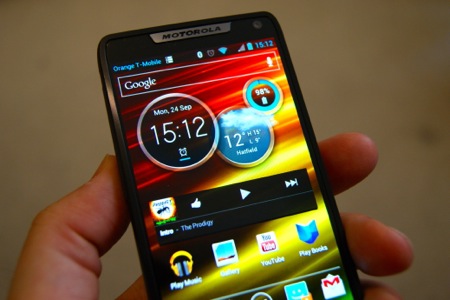 The RAZR i is based on the RAZR M, launched in the USA a week earlier. The key difference is that in place of the latter's dual-core Qualcomm processor and support for LTE the RAZR i has a single-core processor running at up to 2GHz with Intel's Hyper-Threading technology.

At the launch event, Intel was keen to insist that it can hold its own against many dual-core devices on sale today. From our own tests, it seems the company wasn't lying. Besides almost matching the benchmark tests of the 1.5GHz dual-core Sony Xperia S, the other key feature of the RAZR i is vastly improved battery life. 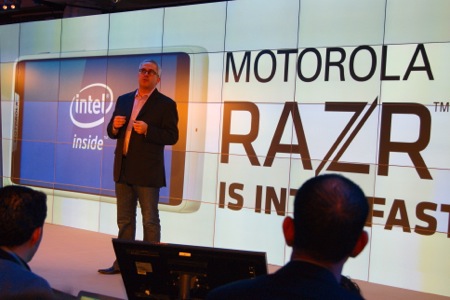 Intel proudly unveils its most powerful smartphone yet

Motorola claims that you'll get around 20 hours of mixed usage from the phone, preferring to use a more realistic figure than the maximum potential standby time, usually measured in lab conditions that are nothing like real life.

Sadly, Motorola hasn't revealed the actual talk time and standby figures for comparison purposes, but in almost a week of testing the phone easily managed 24 hours before needing to be recharged with regular usage. That includes lots of internet use, a few calls, emails, and texts, and around eight hours of idle time overnight. 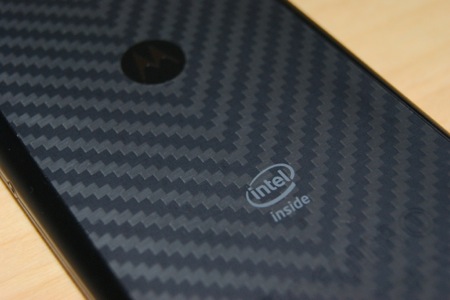 Most people won't see or care about the hardware, or take much notice of the 'Intel inside' logo, but the chip has a number of optimisations to improve day to day use, such as allowing the camera to launch in under a second (even when locked, using the dedicated 'camera' button) and take a burst of ten photos in just one second.

The rear camera is 8-megapixels with LED flash, and support for HDR modes and 1080p video recording.

The phone flies along for everything except the home screen launcher, which does sometimes lag. Having tested the phone with a third-party launcher (Nova Laucher), it's clear that it isn't the Intel chip to blame here, but rather Motorola needing to optimise its own code a little bit.

Ironically, besides the launcher there's virtually no difference between this and a standard Android 4 (Ice Cream Sandwich) phone. Motorola will roll out an update to Jelly Bean soon, but didn't expand on what 'soon' meant. 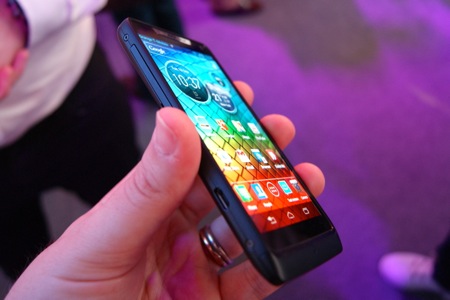 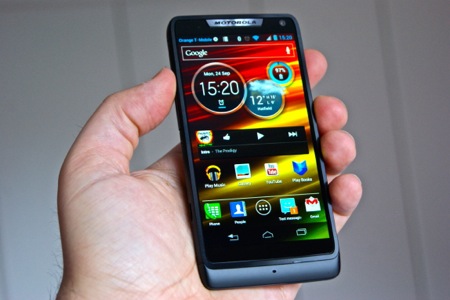 Back to the hardware and - most importantly - the screen. This is what will sell the device because it's quite stunning thanks to an edge-to-edge display. It may not have the same high-definition display of many new phones, but it's still not bad at 540x960 pixels).

The bezel hasn't completely gone, but it's by far the narrowest you'll see on any phone. The RAZR i has the same size screen as both the previous RAZR models, but the handset is considerably smaller. To reduce the height, the Android buttons have been moved onto the screen itself. 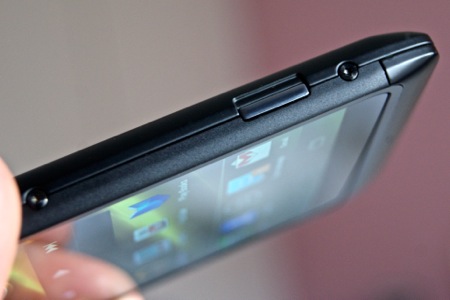 Ready for action: The dedicated camera key that launches the camera in the blink of an eye 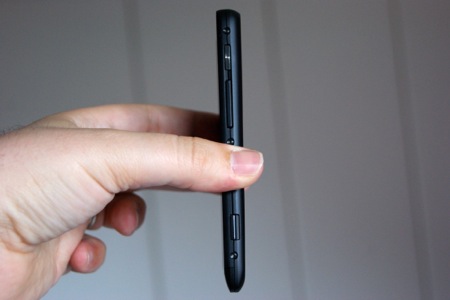 The phone is also thin, despite packing a 2,000mAh battery 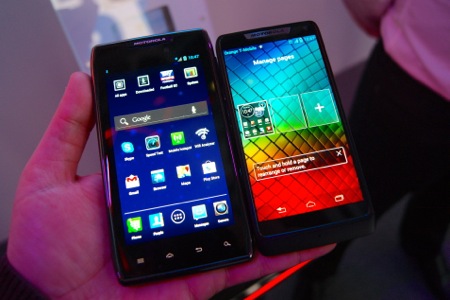 RAZR maxx (left) versus the RAZR i (right)

Like the RAZR and RAZR maxx, the i keeps the same materials, like Corning Gorilla Glass on the front and Kevlar fibre on the back. There's still a decent-sized speaker for enjoying decent sound, from playing music to operation as a speakerphone.

The RAZR i will probably remind you of the old days when Motorola built truly iconic devices, even if the software was awful and you hated every minute of trying to use it. Thankfully, since the introduction of Android, those days are long gone. 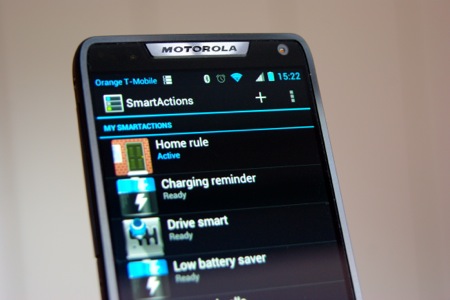 Motorola might not have included any of its own apps (although things like Motocast can be downloaded via Google Play) but it must have impressed Google with one app. Smart Actions is included as standard and can squeeze more life from you battery with a series of rules.

Smart Actions gradually learns your usage patterns, your locations, the hours you work or sleep, and will offer to set up new smart actions over the coming days, so you're not too daunted by options. You can tweak all the standard rules, or create new ones from scratch.

Besides saving battery life, you can do clever things like turn the ringer off when the phone detects (via the calendar) that you're in a meeting, or override the silent ringer if someone calls you more than three times in a short space of time (suggesting it might be important enough to answer even if you didn't want to be disturbed).

There's also a car mode to make it easier to use the phone when driving, and an in-car cradle will be available as an accessory later in the year. 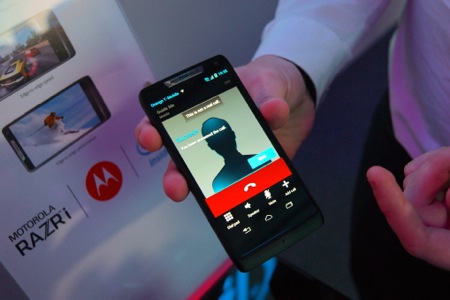 Help on demand: Visual tutorials explain every aspect of getting the most from Android

While most smartphones are easy to use these days, Motorola has included loads of helpful guides with visual demonstrations to show how to perform various tasks. Some might seem obvious, almost patronising, but there's bound to be a few tricks you'll learn even if you're an expert.

One thing to note about Google's influence is that there are some compromises - namely the removal of Motorola's Webtop mode that turned previous models into a desktop-like PC when connected to a TV or laptop dock.

In fact, there's no HD output at all - much like other Google Nexus devices. On the plus side, there's a memory card slot to add up to 64GB of storage, on top of the 8GB internal storage (5GB for content, the rest for installing apps).

It's also worth mentioning that even if Apple didn't see the benefit of adding NFC, Motorola has opted to include it. You may have to wait a while to do much more than tap against other NFC devices to share content, or pair with a somewhat limited range of accessories, but at least it's there. 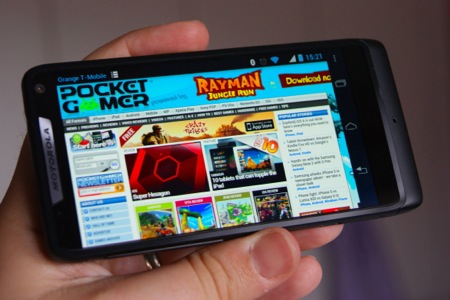 Looking around Google Play, you'll find no problems downloading apps to run, even though it uses an Intel chipset instead of ARM. The only apps or games you won't be able to get are Tegra enhanced games, or Google's own Chrome browser which the company says will be updated before the RAZR i actually goes on sale at the start of October. [Update 27/9/12: Motorola has now informed us that as of today, Chrome is now available for download]

Playing a 3D game on the RAZR i proved that even with one core the phone is really fast. What's even more noticeable is that even after playing a game like Dead Trigger for 45 minutes, the phone was neither red hot nor suddenly showing a huge drop in battery power.

Whether that's down to Intel's clever engineering, the lower power consumption of the screen, or a larger battery doesn't really matter. The important thing is that the phone gives you a feeling of reassurance that you can actually use it without risking being caught short. 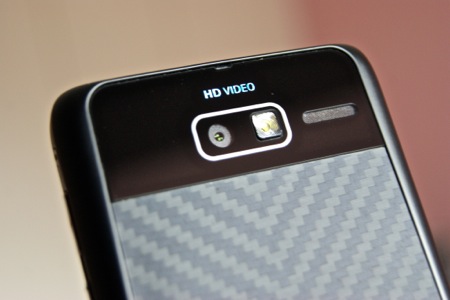 If there's one aspect that looks a little dull, it's the design around the camera and speaker

As a package, the RAZR i is soon going to make other phones look quite old-fashioned, just as early generation flat-screen televisions now look laughable compared to the narrow bezels on models on sale today.

Despite all of the great things about this phone, it's all pointless if you can't buy one. Whereas previous Motorola releases have been mostly confined to sales via online retailers in SIM-free guise, you'll be able to get this phone on the high street from the start of October, from operators including Orange, T-Mobile, Phones 4u, Virgin Media, and Tesco phone shops - with prices starting at just over £20 per month. 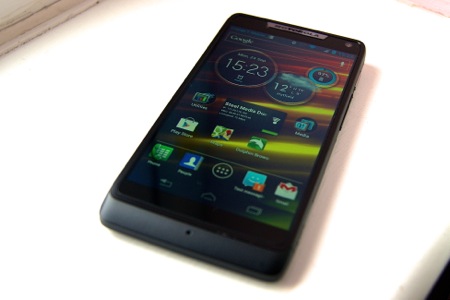 The lack of a screen edge is what gives Motorola a real edge with the RAZR i, which also shows that Intel has become a serious player in the smartphone market. Better yet, Motorola has managed to get this phone onto the high street so you can actually get one
By Jonathan Morris
| Sep 25, 2012 |
Android + Mobile