Released in Japan back in July, this visually inventive effort from Game Arts invites you to guide a skeletal hero through a series of chalk-drawn environments.

Not only does Dokuro have to deal with fiendish traps and fearsome contraptions to stay alive / dead, but he also has to do so with a princess in tow. 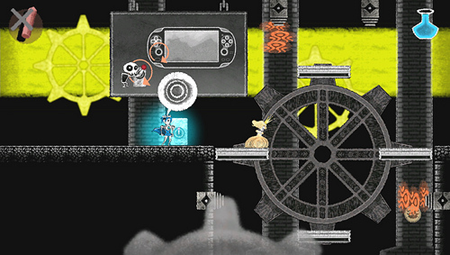 You see, our bony protagonist has fallen cranium over calcanei for an imprisoned maiden, and has taken it upon himself to help her escape from the evil Dark Lord's castle.

In addition to moving crates, pulling levels, and occasionally turning into a prince (long story), you will be able to use the Vita's touchscreen to control chalks. These have the power to reshape the environment.

On release, Dokuro was met with critical acclaim in Japan, so we're looking forward to dusting off our Vitas and drawing our own conclusions come October.

Pocket Gamer Court: Is Square Enix having a laugh with its mobile pricing?

It's time to twang a fox