How to ward off The Curse - iPhone, iPad, and Android walkthrough for Puzzles 1 to 20

The Curse is a new 69p / 99c iOS and Android puzzle game that's packed with 100 mind-bending brainteasers. We've played it, and some of them are tricky.

Believe us: this game will frustrate you to the point where you'll be ripping your hair out every two minutes.

Some puzzles challenge you to correctly match rotating objects, while others task you with solving riddles, completing Sudoku-like math squares, and repeating sequences that are displayed on-screen. Basically, there's lots to learn.

Luckily for you, this little walkthrough will, well, walk you through each puzzle. Some are randomly generated, so we can't really help with those. The majority are set, however, so we've provided solutions for them. 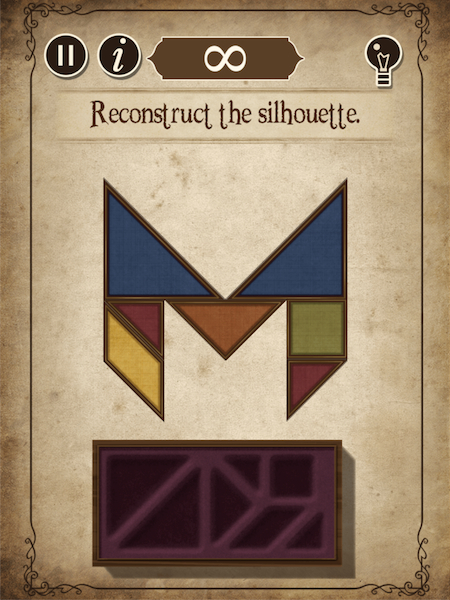 The first puzzle you'll come up against is a tangram puzzle in which you have to rotate and drag a variety of coloured shapes into a silhouette. Replicate the image above to progress. 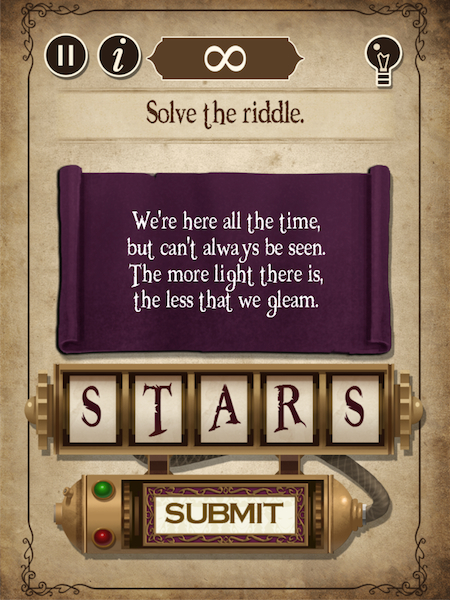 Puzzle 2 is a riddle, and a fairly easy one at that. Simply input the word 'stars' and tap on the 'submit' button to move onto puzzle 3. 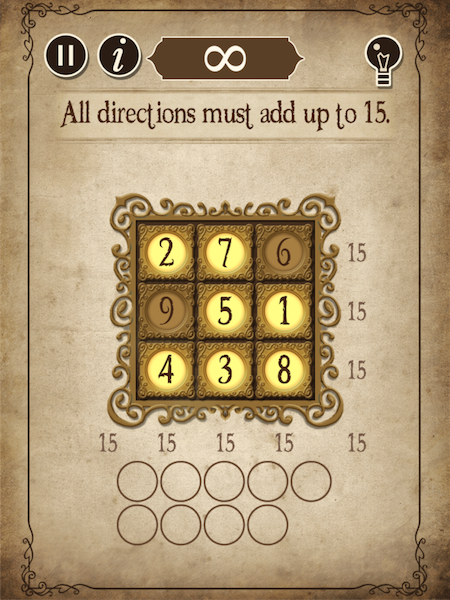 The third puzzle you'll come up against can be tricky, but shouldn't pose much of a threat if you're familiar with math-based games such as sudoku. Drag each number into the square above it and ensure that every direction adds up to 15.

It's randomly generated, so the image above is the solution to only one puzzle permutation. 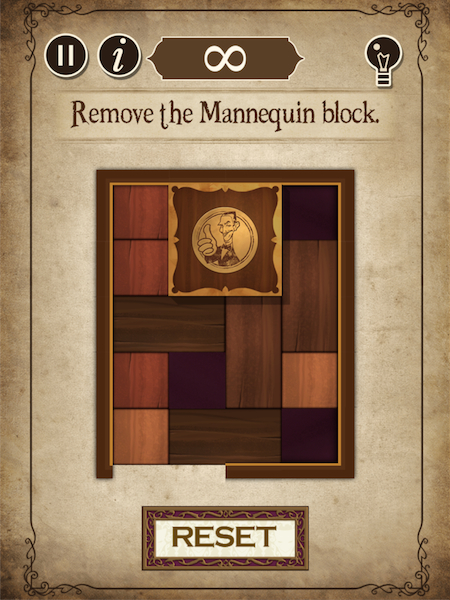 Now, puzzle 4 is a sliding blocks brainteaser, which makes it a lot harder to explain. Use the images to track where you're up to.

Firstly, move the largest right-most block upwards and the small block that's below it downwards - this should create a gap. 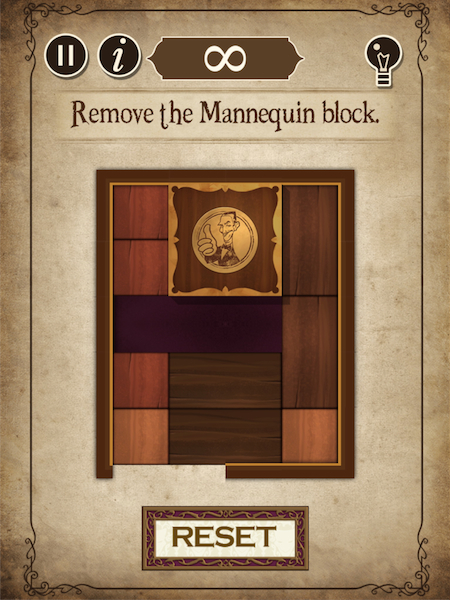 They should now be sitting to the right of the Mannequin block. Finally (for now), move one of the squares in the bottom-left corner of the board to replicate the image below. 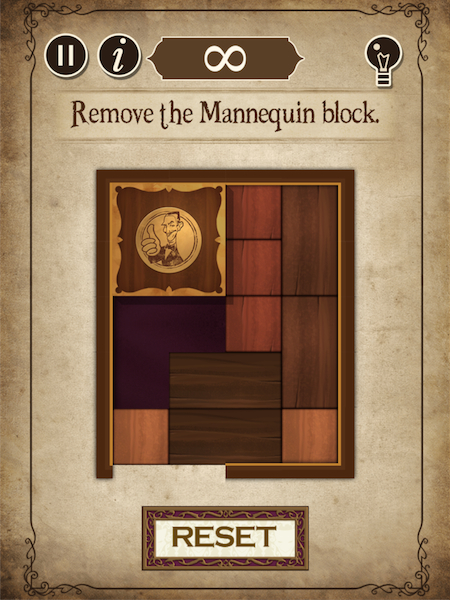 Slide the Mannequin block downwards and move the two squares that you moved in the last part until they're above it.

Slide the small square in the bottom right of the grid upwards, too, and then slide both of the large horizontal blocks at the bottom of the grid to the right. 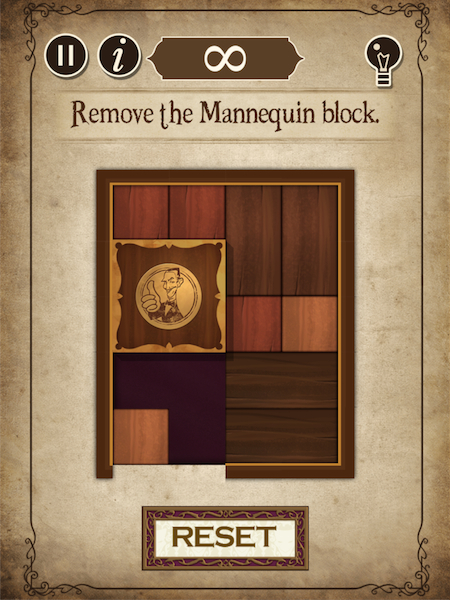 Finally (for good this time), slide the two large horizontal blocks upwards, and the small square in the bottom left to the right. Hey presto! 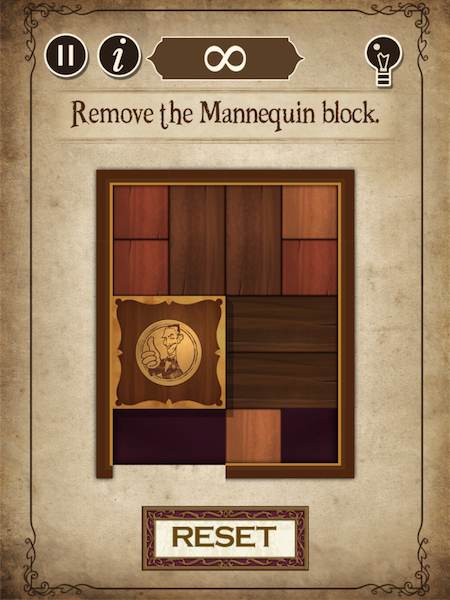 Slide the Mannequin block down to complete the puzzle. 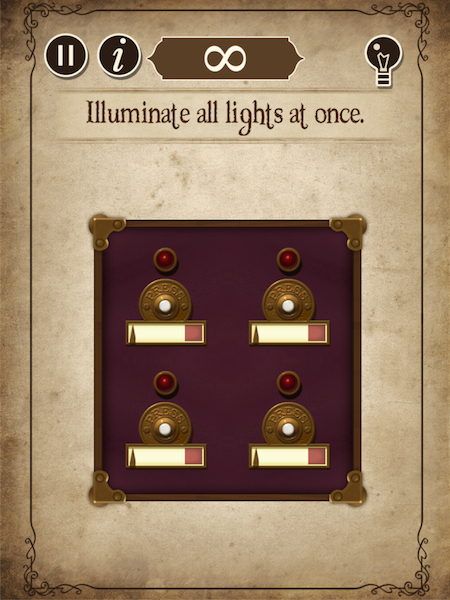 The order in which you have to press the buttons in puzzle 5 appears to change every time you play, so we can't really help you. This puzzle is pretty straightforward, though, so you shouldn't have much trouble completing it.

Just tap the slowest button first and the fastest button last. Yup, it's that easy. 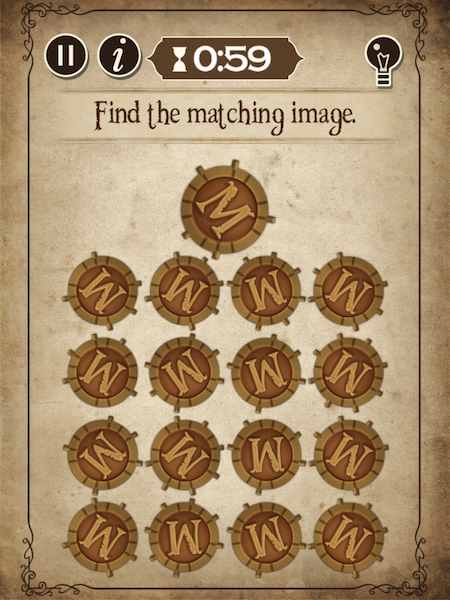 Again, it's pretty hard to help you with this puzzle as you simply have to match two objects. Plus, the placement of said objects changes every time you play. Still, you'll fly through this puzzle without our help. 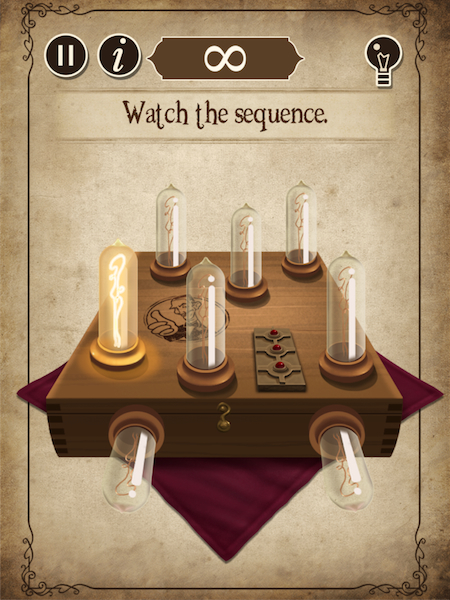 Another puzzle we can't explain in print. All you have to do to complete this brainteaser is watch a sequence of flashing lights and then replicate it. There are three rounds to this puzzle. 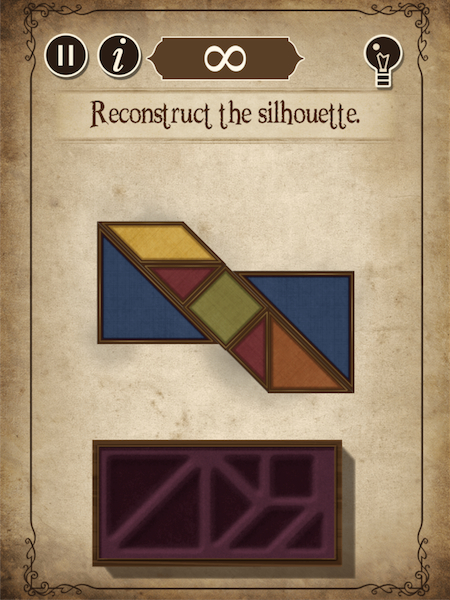 Simply drag, rotate, and place the colourful on-screen shapes into the silhouette. 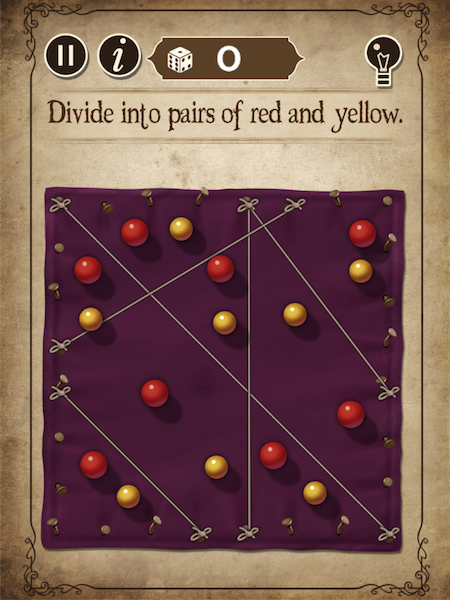 In order to complete puzzle 9, you have to divide the on-screen pins into red and yellow pairs by drawing lines with your finger. Replicate the image above to progress. 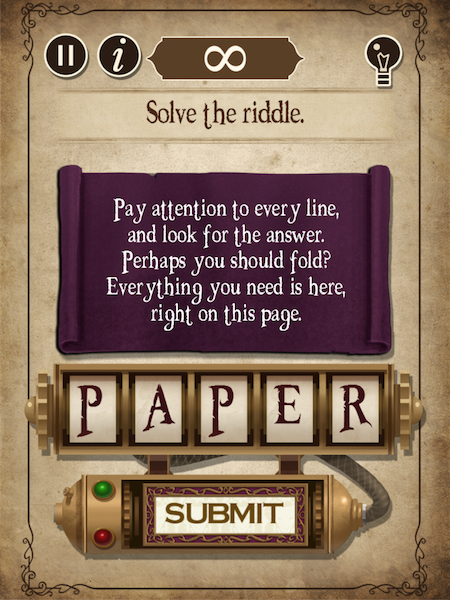 Another easy riddle. Enter the word 'paper' and you'll be allowed to move onto puzzle 11. 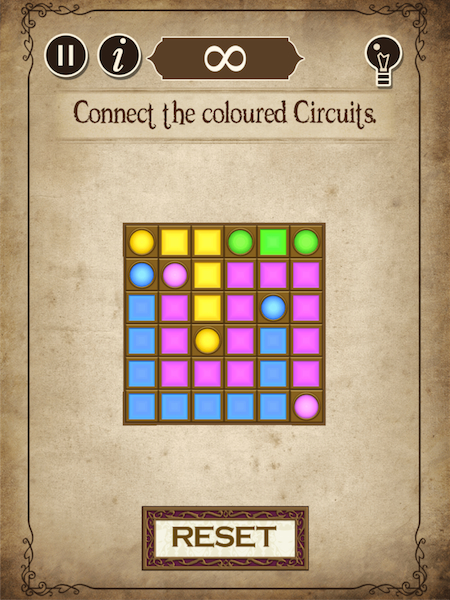 As the game explains, you have to connect similarly coloured orbs in this puzzle by drawing a line between them. You also have to use every square on the board, which makes your task a little bit more difficult. 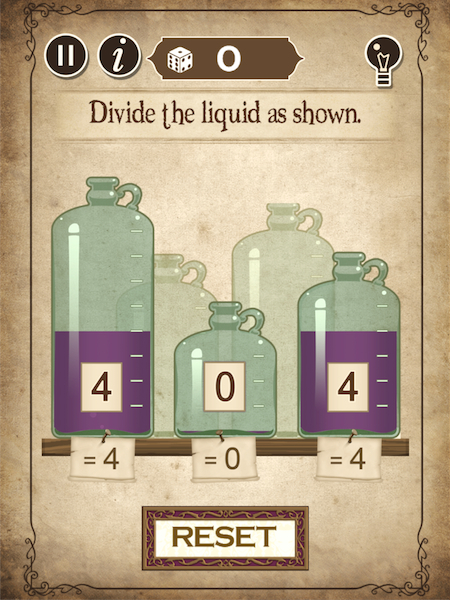 Remember the puzzle in Die Hard: With a Vengeance where Bruce Willis and Samuel L. Jackson had to fill a jug with an exact amount of water? Well, puzzle 12 is just like that.

Firstly, tap the jar that contains eight litres of liquid and transfer part of its contents into the five-litre jar on the right.

Now, pour the right jar - once again - into the middle jar, and the left jar into the right.

Finally, pour the right jar into the middle jar, and finish by pouring the liquid in the middle container into the left. 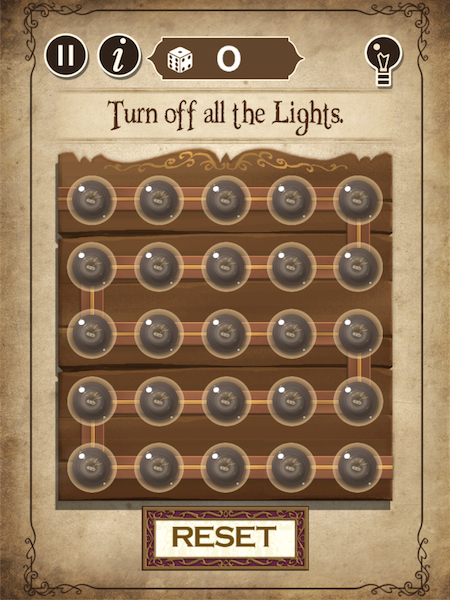 Your sole aim in this puzzle is to turn off all the lights. This is easier said than done, though, because tapping your screen has an effect on multiple bulbs.

Still, this puzzle is easy: just tap the middle bulb and then all four corner bulbs in any order. Simple. 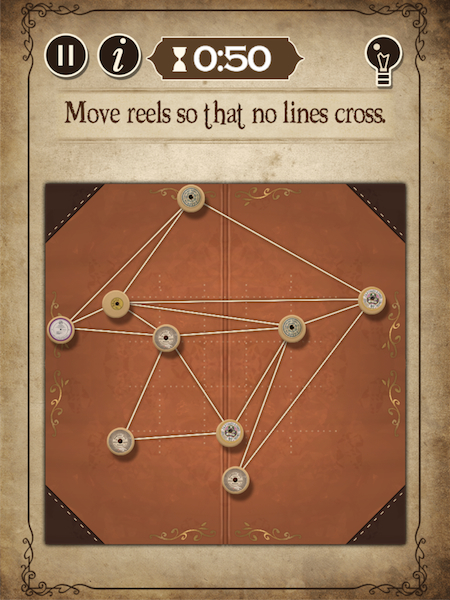 Unfortunately, puzzle 14 is another trial and error puzzle. Luckily, it's not that hard to complete.

Basically, keep moving the on-screen pins around the strings attached to them until they are untangled and turn white. 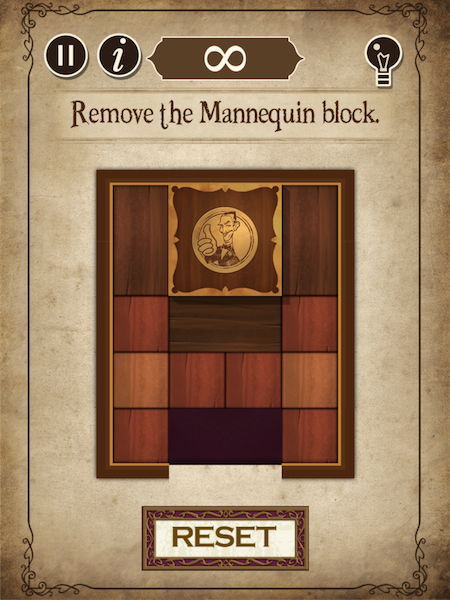 Firstly, move the two small red squares in the centre of the puzzle downwards, and then repeat the process with the larger horizontal block.

Next, move the top two small square blocks on the right side of the board under the Mannequin block, and slide the large vertical block downwards. 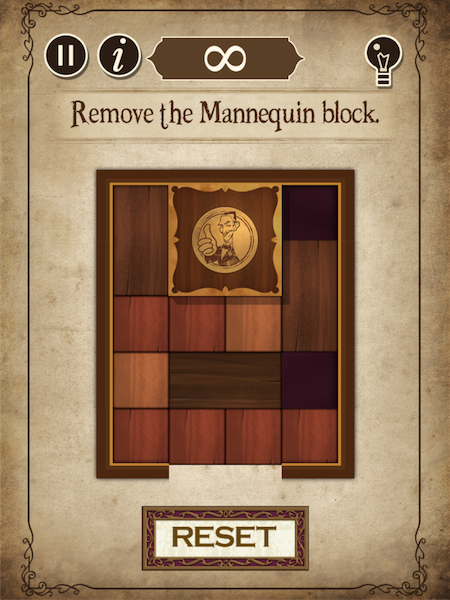 Now, slide the Mannequin box to the right, and move the two small red squares that sit under it upwards so that they sit beside it. 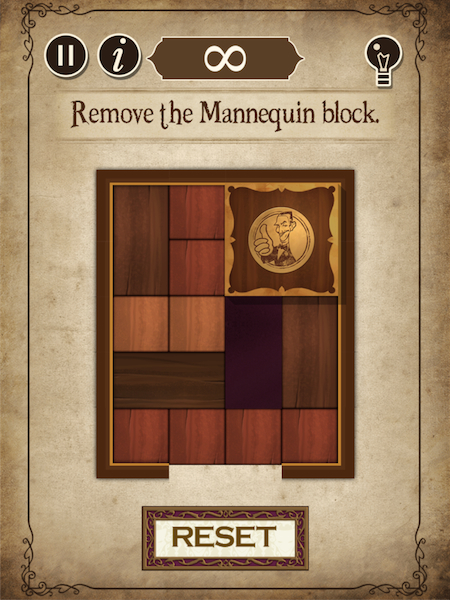 Slide the large vertical block on the right side of the board to the left, and then slide the right-most small red square upwards one place. 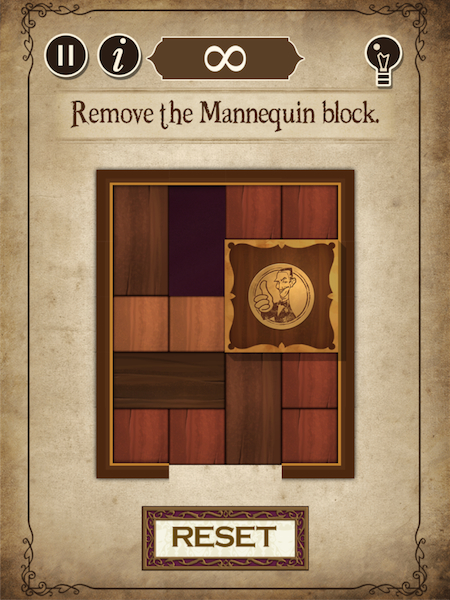 Move the large vertical block on the left side of the board to the right, and slide the two small beige squares upwards and to the left of it. Slide the horizontal block upwards, too.

Now, slide both of the small red squares on the left side of the board so that they sit on top of each other, and slide the large vertical block all the way to the left. 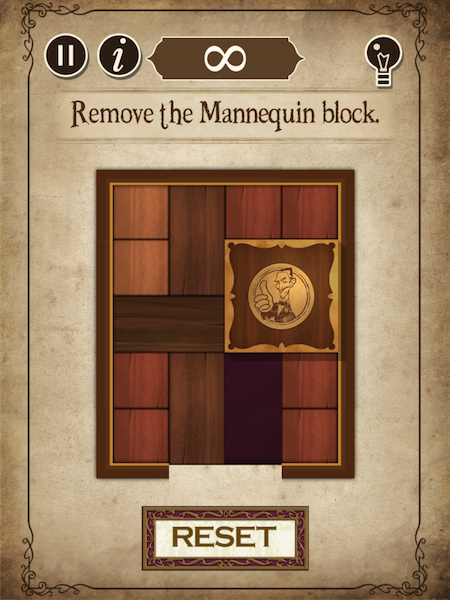 On the right side of the grid are two small red blocks lined up vertically. Move them so that they're lined up horizontally at the bottom of the board, and slide the Mannequin cube downwards so that it sits above them.

Now, take the two small red squares that are situated in the top right and slide the left square under the right. Move the large vertical block to the right, too.

Next, move the bottom small beige square upwards so that it sits to the right of its brother, and move the large horizontal block upwards.

Lastly, slide the large vertical block upwards and the two small red squares that are beside it to the bottom of the board. 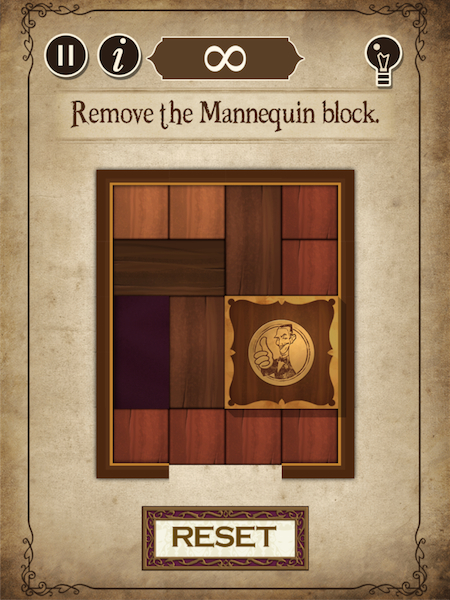 To finish this puzzle, slide both the large vertical block and the Mannequin block to the left, and the small red squares at the bottom of the board to the right. Done. 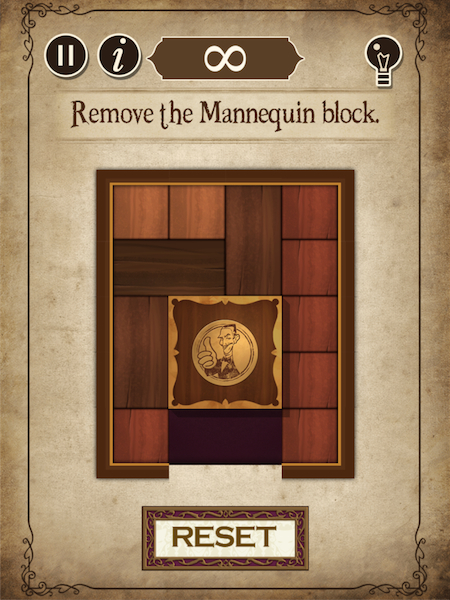 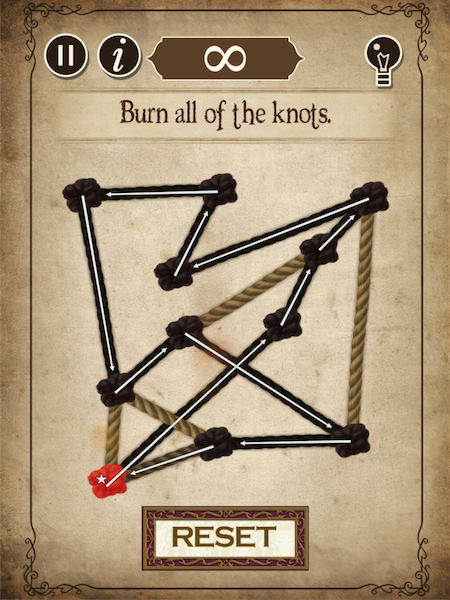 To complete this challenge, you have to burn every knot and return to where your fire started without crossing your own path. Check out the arrows on the above screenshot to complete this puzzle. 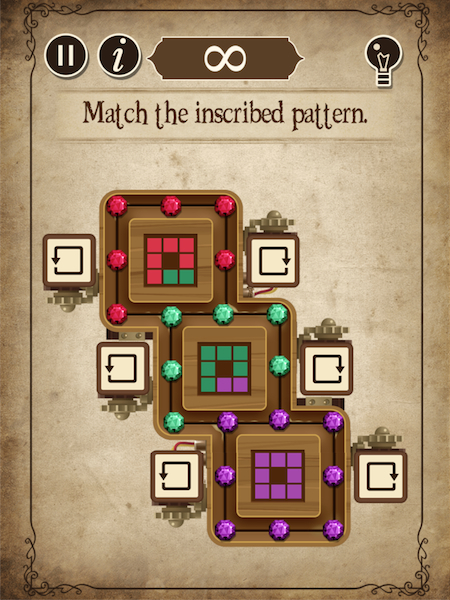 In puzzle 17, you have to recreate the pattern made from coloured squares in the centre of your screen by rotating and moving the gems that surround them. Again, this is mostly trial and error.

To make your life much easier, you'll first want to focus on moving all red gems to the top of the board and so on and so forth, rather than completing the puzzle. 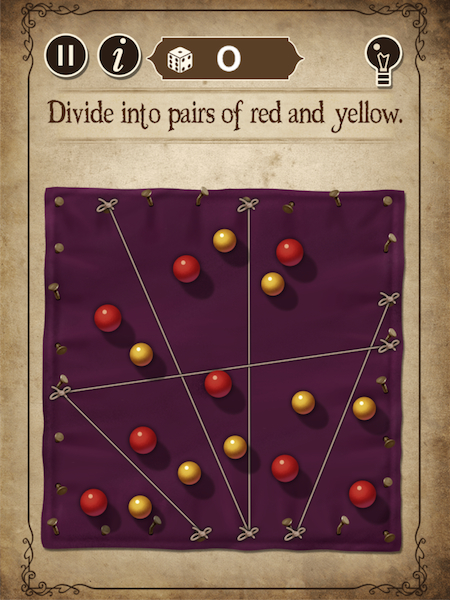 You know the drill. Reproduce the screenshot above to advance. 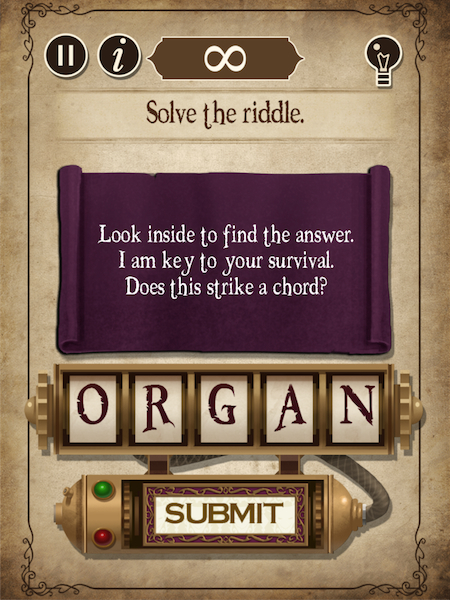 Another riddle. This time, the answer is 'organ'. 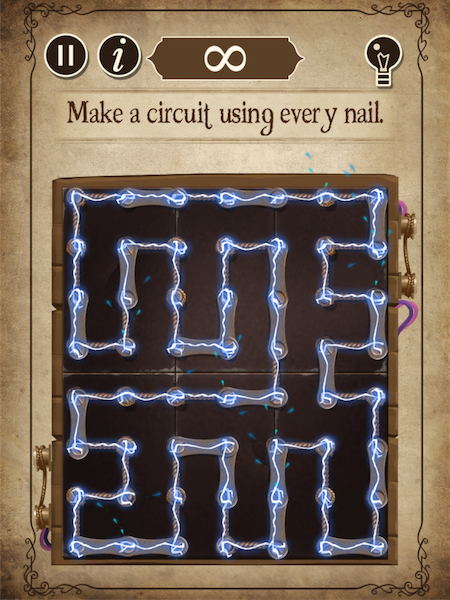 Your aim in this puzzle is to construct a complete circuit by laying wire between the numerous pegs that are dotted around your screen. The solution is in the screenshot above, so you shouldn't have any trouble.

Need help with the rest of the game? Let us know in the comments below.

Want more? Check out our growing collection of The Curse articles!

An ancient book. A mischievous adversary. An unshakable curse...