If Infinity Blade taught developers anything, it’s how you can get a mobile game to feel like a console game while staying true to the format.

The formula for this is pretty straightforward - pump out all the fancy 3D graphics and epic you like, but keep the controls and the core gameplay systems simple. It’s a formula the developers of Horn have stuck do while daring to edge ever closer to full-blown console adventure territory.

The result is a stunning, absorbing, epic and yet slightly flawed game for your iPhone or iPad.

You play the part of the titular hero - a young Blacksmith’s apprentice in a mediaeval fantasy world. I had to stop myself from typing ‘typical’ there, because Horn’s universe draws from a wider range of sources than your run-of-the-mill Tolkien love-in.

The main antagonists in the game - as well as your pompous companion - belong to a weird and wonderful robotic race called the Pygon. Their proportions vary, but generally call to mind the robots from Ghibli’s Castles in the Sky or Warner Bros’s The Iron Giant - formidable yet strangely graceful.

You soon figure out that each lumbering Pygon contains a living creature, so it’s up to you to make like Sonic The Hedgehog and bust them out.

Rather than curling up in a spiky ball, though, you have to use the various bladed or weighted weapons you create for yourself in the forges dotted around the world, as well an arm-mounted crossbow weapon your discover early on.

Link to the game

The smartest decision Phosphor Games made with Horn is to not adopt virtual controls. It’s created a third-person adventure game that sticks pretty closely to the console Zelda template, but which plays like a cross between a point-and-click adventure and a hack-and-slash RPG.

To move Horn you touch on the screen where you want him to go. To make jumps you touch the other side of the gap, with the occasional prompt to touch the ledge in order to grab onto it.

Admittedly his takes a while to get used to, and it hasn’t been executed flawlessly. It’s all too easy to get stuck on level furniture (one extreme case required a restart) or for the game to misinterpret what you want to do. There are also some irritating sub-systems, such as the slow swipe to creep across narrow ledges.

But overall we find it laudable that the developer has stuck to its guns and built a vast adventure game around this simple touch-driven control system, even if it doesn’t always flow as it should.

Combat lends itself well to this control approach. When you encounter a Pygon, you’ll automatically lock into place a few metres away from it. You can tap two 'dodge' buttons to strafe around it, avoiding attacks and locating weak points. Swiping the screen then initiates a range of sword or axe slashes.

Each enemy has its own weak point that, when exposed with a few well-placed blows, will suffer far more damage when hit. Each fight becomes a probing, strategic affair, like a welterweight boxer dancing around a heavyweight, throwing off jabs here and there.

There are also QTE-like special attacks that present themselves once or twice per fight, where if you’re quick you can jump over a sweeping attack and stun the enemy at the same time.

Meanwhile, out in the wider world you can target the odd enemy (but mainly just floating bonuses) with your mini-crossbow, which flips you into a static first-person shooter view. Once you’ve aimed, you have to physically pull back the mechanism, like you’re flicking an elastic band. It’s almost as satisfying as it sounds.

Special mention really has to go to Horn’s technical and artistic achievements - though again not without caveats. We’ve mentioned how fresh the world is (at least compared to other fantasy games), and it has the looks to match, with plenty of sweeping vistas, towering castles, and perilous drops.

The huge oversized Pygons that sit in the background of many of the levels are brilliant, giving you both a reference point as you zig-zag across the stages and imbuing the levels with a bit of personality when the occasionally repetitive switch-pulling tasks begin to annoy.

All this visual splendor does come at a cost, though - there were numerous stutters as we played through on our third-generation iPad.

Horn is a hugely ambitious - and ambitiously huge - adventure game that admirably tries to marry a traditional console experience to an intuitive touchscreen control system. While there are definite issues with the execution, it’s impressive just how much it gets right. 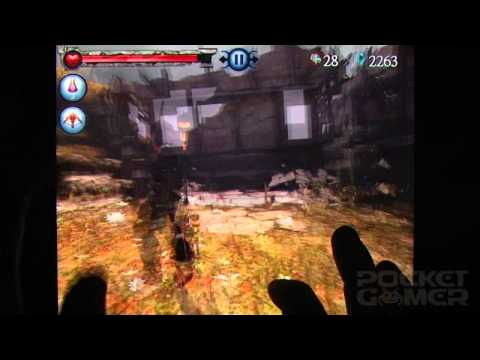 Want more? Check out our growing collection of Horn articles!

An ambitious Zelda-inspired adventure offering plenty to get your teeth into. Horn shoots for the stars and, barring a few technical issues, lands admirably close
By Jon Mundy
| Aug 17, 2012 |
iOS + Android
Find out more about Horn