The comparisons between Phosphor Games' Horn and Epic/Chair's Infinity Blade are pretty obvious.

Both games look amazing, both use the Unreal Engine, and both have locked-in combat against huge monsters where you dodge, swipe and attack in a fluid manner (as much as we can tell from Horn, having not played it yet).

Yet by offering a fully interactive third person environment when you're not in combat, Horn looks to bring a more action-adventure atmosphere - Zelda or Fable spring to mind - into play.

It also has a more traditional narrative.

Based loosely on the Old English tales of King Horn, you play as Horn, a young blacksmith's apprentice, who wakes up to find his village overrun by fantastic, and sometimes humorous, stone monsters.

It become apparent that these are the people and animals from the village who have been transformed by a curse.

Of course, you have to free them, so alongside your uncooperative, ill-tempered, grudgingly helpful sidekick - more Fable - you set off on your quest.

It's pretty impressive stuff, and that's the reason social gaming giant Zynga has decided to shell out big bucks to publish the game, despite it hardly appealing to the FarmVille generation. 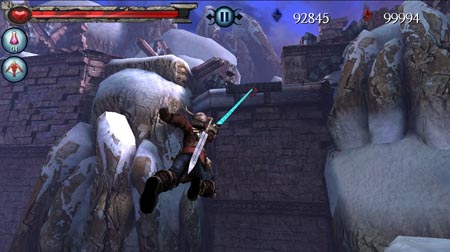 Horn is due to be released for what's described as 'mobile devices' in August.

You can check out more of the action in the official trailer below.

Exclusive wallpapers for your iPhone, iPad, and smartphone