If a third-person, over-the-shoulder endless-runner makes you flinch, then you know it's doing something right. That little twitch when you smash into an obstacle means the game has got its claws into you.

It's something that happens quite often in Agent Dash!, and it's testament to a perfectly balanced difficulty curve that every crunching smack into a wall or vaporisation in a laser field makes you want to loosen your bow tie and try again.

You play as a secret agent sprinting through a gorgeously realised world and dodging a variety of different obstacles, from rocky outcrops to pools of toxic sludge. It's Temple Run does James Bond essentially.

Except rather than tilting your device, you control it all with swipes. Sliding a finger up or down makes you jump or skid along the floor, while left and right make you move to the left or the right.

You'll automatically turn a corner if you're on the correct side of the three lanes that make up your secret agent-themed running track.

Occasionally, you'll have to shoot things as well, tapping on the screen while your secret agent blasts away with his twin pistols. You also need to collect the diamonds that are scattered tantalisingly around the path.

You can spend diamonds on a variety of power-ups, from rocket packs to magnets, and once they're purchased they'll appear from time to time in your sprints. You can also purchase one-off boosts at the start of each run, or spend your hard-earned precious stones on new costumes and characters.

As the speed of your run increases, Agent Dash! becomes a blur of twitchy swipes and last second misses, the changes in scenery from secret base to English country town and lush jungle letting you know how far you've made it this time.

You'll soon find yourself in a rhythm of crash-swear-retry, pushing to get that little bit further, to climb that little higher up the leaderboard.

It might be another game inspired by the success of Temple Run, but Agent Dash! adds enough of its own ideas - and, more importantly, enough of its own distinct flavour - to slot comfortably alongside its inspiration at the pinnacle of the genre. 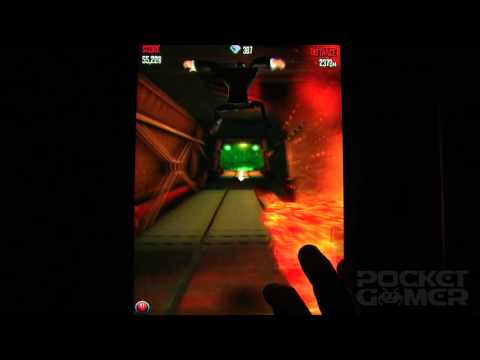 An endless-runner with a sense of style and a great difficulty curve, Agent Dash! entices you in with pretty graphics, and before you know it you're hooked
By Harry Slater
| Aug 2, 2012 |
iOS + Android
Find out more about Agent Dash!

Agent Dash looking to both shake and stir the endless runner